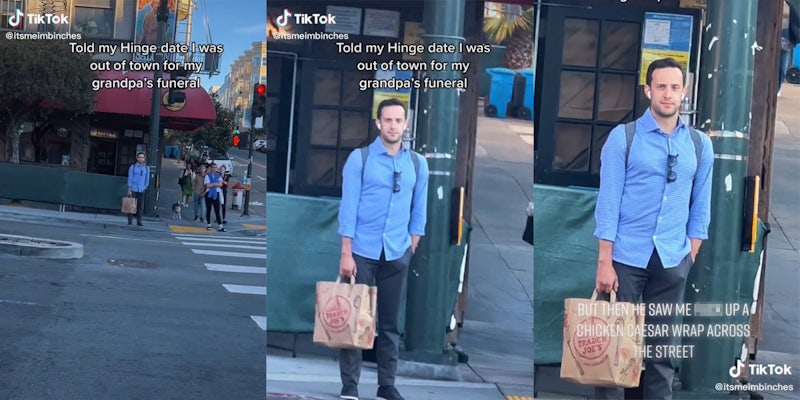 ‘Just be an adult and tell him you’re not interested’: TikToker caught lying to Hinge date about being at grandpa’s funeral, sparking debate

A person claims they captured their Hinge match’s reaction to catching them in a lie.

TikToker Big Binch (@itsmeimbinches) posted the real-life sitcom scenario to TikTok, and it’s since been viewed 3 million times in under two weeks. “Told my Hinge date I was out of town for my grandpa’s funeral,” the text overlay on the video reads. “But then he saw me fuck up a chicken caesar wrap across the street.”

The filmer records a man standing across the street, holding a Trader Joe’s grocery bag with AirPods in his ears. He stares in the direction of the camera, standing motionlessly.

The TikToker used the “I want to go home” sound to set the video.

Hinge touts that it’s a “dating app designed to be deleted” as it focuses on fostering long-term connections between users that will hopefully culminate in folks finding that special someone they want to spend the rest of their life with. Some criticized the filmer for not being upfront with the man and simply telling him they weren’t interested in pursuing a relationship and that the man was lucky enough to spot a “red flag” early on. A few couldn’t believe the filmer recorded the man during his realization that he’s been lied to.

“Bro just [be an] adult and tell him you’re not interested or can’t go out. seriously why is communication so hard for some people,” one said.

The video is the only post on the TikToker’s account, and the profile photo is not of a person. It’s unclear if the video is a repost, or if the incident really unfolded like the TikToker said it did.

One of the more frustrating aspects of dating apps for many is that not everyone is interested in meeting up in real life. The Washington Post even penned a list of reasons as to why folks are usually reluctant to meeting up with online dating matches in person, and there are plenty of forums where folks who’ve been ghosted after multiple text exchanges have discussed this same phenomenon.

According to Statista, there are 44.2 million Americans using dating applications in order to find potential partners, with that number expecting to increase to 53.3 million by the year 2025. Pew Research conducted surveys on folks in the dating game as well: 48% of people questioned who said that they are currently using or have used dating apps in the past were between 18-29 years old. thirty-eight percent of those in the census were aged between 30-49, and just 16% of people above the age of 50.

The Daily Dot has reached out to Big Binch via email for further comment.