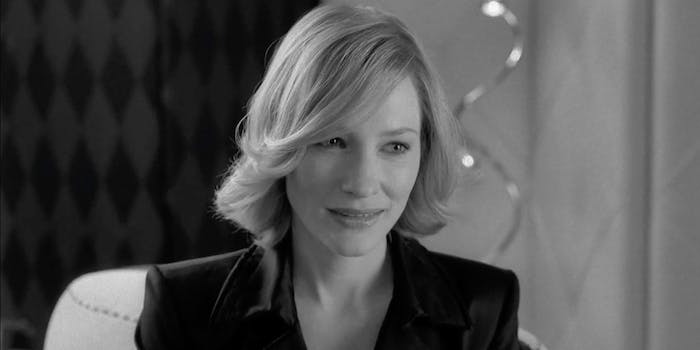 One of my favorite Onion articles ever was a video the news outlet published in 2013, following Jodie Foster’s headscratcher of a non-coming out speech at the Golden Globes. In the acceptance speech for her achievement award, Foster never actually said she was a lesbian—or a unicorn or a pine cone, for that matter—instead giving the audience a confusing lecture about reality television and Honey Boo Boo.

In the article, “Jodie Foster inspires teens to come out using vague, rambling riddles,” the Onion skewered her unwillingness to put a label on it. One of the “teens” tells viewers, “I have to be honest and say something that’s on my mind, and you already know it…so there it is!”

I thought of that video yesterday reading Cate Blanchett’s non-coming out coming out, in which the actress discussed her romantic history with women.

During an interview with Variety about her forthcoming film, Carol, directed by Todd Haynes, the magazine’s Ramin Setoodeh asked Blanchett if if was her “first turn as a lesbian.” Blanchett slyly responded with her own question: “On film—or in real life?” She tells Setoodeh that she’s been involved with women “many times” but that she “never thought” about her sexual orientation. Blanchett, who is married to a man, feels her own experience deeply relates to the character she’s playing: “I don’t think Carol thought about it.”

As a queer-identified man who prefers to live life outside sexual binaries, there’s an inspiring “free to be you and me” message in Cate Blanchett’s interview that hits deeply close to home in thinking about my own complicated sexuality.

However, there’s also something sneakily disingenuous in Blanchett’s calculus that’s very telling. Based on Patricia Highsmith’s The Price of Salt, Carol is about a sexually repressed housewife who engages in an affair with a department store worker (played in the film by Rooney Mara). Highsmith’s novel, published in 1952, was so controversial that Highsmith had to publish it under a pseudonym; whereas most novels punished queer characters with death or suffering, Highsmith dared to give her women a happily ever after.

But in real life, the situation for women like Carol would have been very different. The Price of Salt debuted in bookstores just two years after the founding of the Mattachine Society, one of America’s first gay association groups. This was a time when homosexuality was still classified as a disease by the American Psychiatric Association, and the first meeting of the society took place in a basement in Los Angeles to maintain privacy and safety.

But in real life, the situation for women like Carol would have been very different.

As writer Dan Bryan explains, it was a dangerous time to be gay in America. “The culture of gay men functioned very much below the radar,” Bryan writes. “Under constant harassment by the police, homosexuals risked social ostracism and loss of employment if outed.” Before the 1951 Stoumen v. Reilly case made it illegal to deny a liquor license to establishments that patronized queer clientele, gay bars weren’t even allowed to exist.

Thus, if a woman like Carol never thought about her sexual orientation, it wasn’t due to ideals about sexual liberation and not wanting to be defined by rigid notions of sexuality; she didn’t have much of a choice.

Blanchett, however, does—and it follows a wave of celebrities making similar choices, coming out without saying all that much at all. In 2013, Maria Bello set the gold standard for non-labeling in a heartwarming essay for the New York Times’ Modern Love column, in which she discussed her relationship with her partner, Clare. Bello describes coming out to her children about being in a same-sex couple. Upon telling her son, Jackson, he responds, “Mom, love is love, whatever you are.”

Bello later concludes: “So I would like to consider myself a ‘whatever,’ as Jackson said. Whomever I love, however I love them, whether they sleep in my bed or not, or whether I do homework with them or share a child with them, ‘love is love.’”

What makes Bello’s essay important is how she doesn’t shy away from actual disclosure on her personal life, serving to powerfully normalize her own “modern family.” No one has to identify with a label, but there’s a difference between speaking your personal truth and tipping a toe out of the closet without taking the risk of actually going all the way.

Before the 1951 Stoumen v. Reilly case made it illegal to deny a liquor license to establishments that patronized queer clientele, gay bars weren’t even allowed to exist.

In a recent interview with the Associated Press, Miley Cyrus broke the Internet by saying she was… well, something. When the AP asked her about her Happy Hippie Foundation, which raises money for LGBT homeless youth, Cyrus mentioned that she has a personal connection to the cause, as not all of her relationships have been “straight, heterosexual” ones. But when the AP wanted to know what she meant by that, she shot down further inquiry on the subject.

In an interview with Out magazine, Cyrus further described her disdain for easy categorizations of gender. “I didn’t want to be a boy,” she explained to Out. “I kind of wanted to be nothing. I don’t relate to what people would say defines a girl or a boy, and I think that’s what I had to understand: Being a girl isn’t what I hate, it’s the box that I get put into.”

The Daily Dot’s own Mary Emily O’Hara took that as a sign Cyrus identifies as genderqueer (maybe?), but Cyrus seemed to refute that in an Instagram post responding to the article, when shot back, “NOTHING can/will define me! Free to be EVERYTHING!!!”

While I agree with Cyrus that no one gets to define her gender or sexuality for her, this moment illustrates the problem with the celebrity sexuality wink-wink game. Sexuality can—and should—be beautifully, wonderfully messy, but there’s a particular importance in the simple act of saying “Yes, I am” instead of “Yes, I might be, maybe, depending on how you choose to read my statement.”

As Tyler Coates explained in a 2013 piece for Flavorwire, following Bello’s coming out, there’s an increasing media narrative that we’re post-sexuality or, as New York magazine’s Carl Swanson put it, the “long march toward it’s ‘not mattering.’”

But it does matter, deeply so. It mattered for Carol, who got the happy ending in fiction that so many women were denied in real life, and it matters for the LGBT homeless youth Miley Cyrus advocates for, who are disproportionately kicked out of their homes for the very orientation Cyrus obfuscates.

There’s a particular importance in the simple act of saying “Yes, I am” instead of “Yes, I might be, maybe, depending on how you choose to read my statement.”

According to statistics from UCLA’s Williams Institute, 40 percent of America’s marginally housed youth identify as LGBT, despite the fact that only around 10 percent of all young people identify in the queer spectrum. These kids don’t have the luxury to not think about it, and it’s important that while it has gotten better for some since The Price of Salt debuted, too many others are still policed, harassed, and desperate for community. They’re still looking for a happy ending.

Breaking boundaries of sexuality by defying norms is deeply important, and I applaud the honesty behind Cyrus and Blanchett’s disclosures. However, to paraphrase Kate Bornstein, our fight doesn’t need more allies. What we need is members, those who are willing to stand up and say they are one of us. At a time when our youth need role models like them, true bravery means being fully honest.