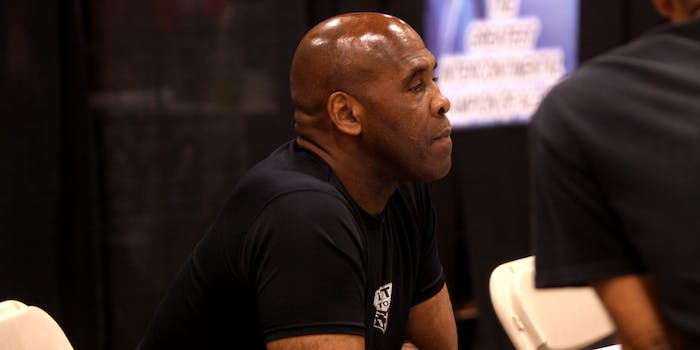 The psychosis of Virgil, a wrestling icon turned lonely meme

There’s a large part of me that feels like Virgil must be trolling us all. My first correspondence with the pro wrestler-turned-social media phenomenon took place via Twitter, which is unsurprising. He speaks in short, flat bursts.

Buy my T shirt http://t.co/ep5NGSFI7K or Im gonna put my foot up your ass #fuckmoney pic.twitter.com/qIOTIjUKhY

The two email interviews I conducted were free of charge, pushing the man once known as the “Million Dollar Man” Ted DiBiase’s valet nowhere closer towards his GoFundMe goal of becoming a millionaire.

What strikes me as odd is that when we transfer things to email, his tone turns warm as a spring day. “Hey sis,” he says in all lowercase letters, before immediately asking me what the hell I’m doing interviewing him and whether he can get that “fuck money”—his unofficial catchphrase meant to denote, well, getting paid.

The two email interviews I conducted were free of charge, pushing the man once known as the “Million Dollar Man” Ted DiBiase’s valet nowhere closer towards his GoFundMe goal of becoming a millionaire. It’s unclear whether the wrestler set up the campaign on his own or with the help of the Magen brothers (his managers), but he’s sure got a long way to go. As of this writing, Virgil has just $410 for his troubles and a whole host of angry messages. “ill [sic] give you a ham sandwich to hang yourself,” one “Jack Son” writes, rather than donating to the improbable cause.

All he had to do last night was ask me #GOPDebate pic.twitter.com/qzuCObbXMO

Virgil has stayed silent on the hate mail and the GoFundMe in general. He may as well leave that side of business up to the Magens. Jian and Page Magen are the duo behind the Iron Sheik’s feisty Twitter persona and might have been writing me all along while Virgil silently nodded, his face as stoic as when he served as DiBiase’s muscle, awash in the light of a computer he’s probably never touched.

The Magens fit into the grand Virgil mosaic as a means to justify his low-tech hustle by bridging the gap between his potential aversion to technology with a bizarrely curated product meant to net him $1 million. A recent profile of Virgil and his PR powerhouse in Sports Illustrated reveals he doesn’t own a cellphone, among other quirks.

Photo after photo after story after vignette have surfaced, painting the man named Mike Jones (no, not that one) as a desperate man in search of a quick buck.

You see, Virgil’s established a reputation since leaving the squared circle. Once riding high off his ultimate victory—beating DiBiase in a 1991 SummerSlam match for the Million Dollar Belt—he’s since floundered, returning to wrestling in spurts, and established himself as “pro wrestling’s saddest man,” according to Deadspin, its readers, and the rarely updated Lonely Virgil blog. Photo after photo after story after vignette have surfaced, painting the man named Mike Jones (no, not that one) as a desperate man in search of a quick buck.

His bread and butter right now are appearances, tons of them in such idiosyncratic locales as flea markets and subway stops. The hours drag on, and inevitably someone snaps a photo of a lone Virgil surrounded by no fans. The meme endures, morphing into its own case study of psychosis once @TheRealVirgil speaks. Virgil’s Twitter feed is filled with non sequitur videos and tweets somewhat akin to his Iranian counterpart, the Iron Sheik. In our first interview, he’s just as punchy.

“Fuck money is that money that you fuck with,” Virgil explained when asked about a phrase that, were he paid $1 per utterance, would undoubtedly make him a billionaire. “Money you wipe your ass with. I want to buy a giraffe and throw it down a flight of stairs for fun. That is fuck money. I live for fuck money. One life to live and one life to fuck.”

I go from getting called “honey” to being angrily told to buy his T-shirts multiple times before Virgil answers my meager icebreaker questions. Am I a “PUNK ASS” for even interviewing this guy? His replies devolve from comparing Phish to Marilyn Manson (“that dude has sex all day”) to informing me he’s returning to wrestling as Fuck Money Jones, making an appearance on Saturday Night Live, and swinging by Comedy Central for a literal roast—a BBQ.

“I want to buy a giraffe and throw it down a flight of stairs for fun.”

Oh, and a bit about his Olive Garden obsession. The Italian chain restaurant is first on his list for expenditures once he’s become a millionaire. “I am gonna buy an Olive Garden Restaurant and attach it to my bathroom,” Virgil wrote before getting really bizarre and pleading for another T-shirt purchase. (I don’t know how he got from the Olive Garden to “and then I am going to have sex with Asians,” but I feel it appropriate to warn an entire continent now.)

“I am waiting for Olive Garden to show me the fuck money,” Virgil wrote. “If not, Subway now needs to look at this 14 inches as their footlong. Jared Fogle ain’t shit. Fuck that guy.” Virgil is, in fact, much less of a liability than Fogle. This is the society we live in. He’s a bit of a wild card, but there’s no crime in being a bit batshit about endless breadsticks and greed.

For our second interview, Virgil is surprisingly lucid, if not megalomaniacal. He’s got a burgeoning music career, apparently, and is ready to take over the world. “My song Fuck Money’s going to come in very soon and I’m gonna win a Grammy… I’m the greatest human being on earth,” he told me, rattling off unrelated genres and listing his entertainer skill set. “I can dance. I could also be an elephant in Africa.”

All of this could be bullshit. Back before oversharing become our base-level existence, celebrities had an air of mystique about them, rendered impenetrable by the sheer fact of their fame. For Virgil to evade my line of questions and veer off into a mild psychosis almost felt like a slightly skewed version of that.

Virgil congratulated Xavier Woods for his SummerSlam victory by insinuating he was his father.

He perked up when I ask him about his old industry and his Twitter feud with Xavier Woods, a current WWE superstar whose storyline places him front and center as one third of the New Day tag team trio, all while throwback Virgil sits in the wings catering to DiBiase. Virgil congratulated Woods for his SummerSlam victory by insinuating he was his father.

No, i'm not your son. When I was 17 you told me that I'd never make it because I'm black #GetOffMe #SubtweetinAss https://t.co/2c9CFoO5uG

Virgil flipped the narrative, at least when speaking with me. “Man, that guy went off on me and all I was trying to be was positive for him and give him some love. I know how it feels to be a black man in this business and now that he’s pushing through I was showing some love,” Virgil’s earnest response read. “I never have [been a] negative Nancy or a guy that would want to see people fail. I’m happy for him. Shit, I wish him well.”

I came up for air from the manic typhoon of Virgil’s rapid-fire answers. Just as a breakthrough appears, I’m jettisoned away from who Virgil is as a person. He loves wrestling, still. He also loves the shit out of himself.

“The current product is pretty good, man. I don’t watch too much but I know what’s up. Wrestling is hot as fuck right now and that’s why people go back to the old-school because I was the greatest of all time and I was in it. I was in the top. I was the main event. I was the Realest of the real,” Virgil wrote, marveling at his own accomplishments.

He’s his biggest fan, his greatest enemy, and—at the end of the day—the only person consistently there for Virgil.

Correction: An earlier version of this article incorrectly identified when Virgil defeated Ted DiBiase for the Million Dollar Belt. It was at the 1991 SummerSlam.