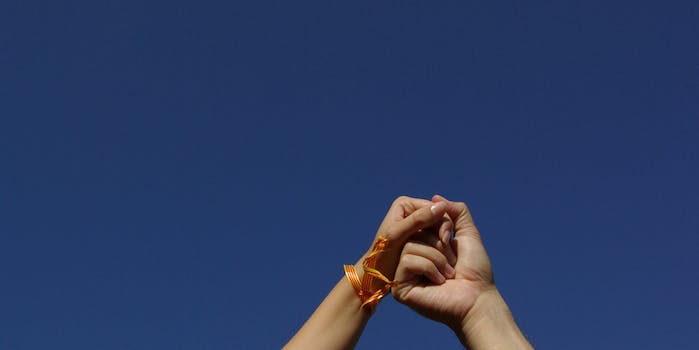 Catalonia's bid for independence at the polls wouldn't have happened without social media behind the scenes.

Catalonia is stretching—warming up before a tedious legal battle with Spain about its autonomy. On Nov. 9, secession from Spain was overwhelmingly approved. Catalan authorities say 80 percent of voters in the unofficial election responded “yes, yes” to the questions, “Do you want Catalonia to be a state?” and “Do you want that state to be independent?”

“Like Quebec, like Scotland, Catalonia also wants to decide its political future—and we have the same right to decide it,” Catalonia’s regional president Arturo Mas said this week.

Spain needs to sober up and accept that its long-standing status quo is in significant peril. You can blame the Internet age—a reverberating sounding board for once-implausible and fringe ideas to marinate just long enough to capture minds and land on ballots.

Almost immediately, Mas turned toward negotiating the secession details with Spanish Prime Minister Mariano Rajoy. However, only 2.3 million of 6.3 million eligible voters reportedly turned out in Catalonia, and Spain isn’t taking the results seriously. Rajoy called the whole exploratory exhibition “a profound failure on the part of the pro-independence process.” Rajoy’s ruling Popular Party government maintains that under the 1978 constitution, a referendum is illegal.

The vote marked the first time the Catalonian ballot took on independence. The notion of separating from Spain percolated almost 85 years ago, but the Spanish Civil War quelled it. After General Franco’s fascist rule ended with his death in 1975, Catalan regained its autonomous identity.

But it was an identity tethered to Spain—the way it’s been, through kings and generals, since the 15th century. Soccer powers Barcelona and Real Madrid are the yin and yang of Spain’s globally popular league, yet despite the deep institutional disdain from both clubs toward each other, everyone expects the teams to unite every summer and play under the Spanish banner internationally.

Vastly broadcasted calls to action and emotional appeals are changing all that. In Catalonia, the Internet age led to multiple deftly coordinated independence rallies. In July 2010, local police estimated that more than a million people demonstrated in downtown Barcelona. The images of unity were unmissable: The Catalan flag, created in the early 20th century as a tweaked homage to recently free-from-Spain Cuba, waved with singular purpose for the Western world to admire.

In 2012, 1.5 million turned out on Sept. 11 for Catalonia’s national day, La Diada, which commemorates its defeat at the hands of King Philip V’s army during the War of Spanish Succession in 1714. A year later to the day, and at 5:14pm as a hat tip to the year 1714, hundreds of thousands of people in Catalonia made a 250-mile-long human chain across the country demanding a tangible, Spanish-recognized vote for independence.

On social media, parallels about the Berlin Wall and Nelson Mandela waged a psychological campaign for local and European sympathy. Both comparisons would eventually be broadcast on giant screens in downtown Barcelona.

Just two years ago, separatism could be fairly described as conversational. Just look to the comments section from a Debating Europe blog post from 2012 for a deep strain of partisan talking points. Non-Spaniard commenters offered window-shopping like: “I think [independence] will cause yet more problems for Spain, Europe and the Eurozone. Encourage a looser federal structure that would give rebellious regions like Catalonia more autonomy without fracturing a country.”

Today, democracy is the broad narrative and we’re being reminded of Spain’s “empire mentality.” Now there are emotionally compelling images, and we have sympathetic headlines like “The people of Catalonia have voted. Let democracy take its course” in The Guardian.

That’s because the world finally has a handle on what Catalonia is. As Catalan resident Matthew Tree wrote:

For 30 years, explaining the reality of Catalonia—its diversity, its sense of being a country, its own language, its literature, its culture, its very existence—to foreigners has fallen on deaf ears. Or in this case, wilfully deaf ears—because so little information about Catalonia has been allowed to leak into the outside world, it has often been viewed with suspicious disinterest by foreign observers. By voting for its independence, then, we all felt we had done our bit to inch Catalonia out of the hiding place where history, aided by Spanish central power, has squirrelled it away for so long.

In 2011, Facebook and Twitter were nestled at the heart of the Arab Spring’s organizational structure as countries like Tunisia, Egypt, Libya, Yemen, and Syria enjoyed unrelated uprisings and protests against authoritarian powers. As BBC News World Affairs editor John Simpson hinted at this week, it brought chaotic, devastating noise with unclear winners and losers.

At its least consequential, a magnified onslaught of banalities bloats things. This summer, as Scotland grappled with existential crisis—and whether to stick it out with the United Kingdom or go solo—hip musicians became trend-setting philosophers on both sides of the issue. The Internet rampantly collected opinions from whimsical indie rockers, and someone felt compelled to ask the dude from Glasvegas what he thought.

The only important issue in Catalonia isn’t about centuries of conflict, or nationalism, but how a brand new member of the European Union would expect to function and thrive.

Like any good state’s rights issue, economic factors stir the paella pot. Catalonia’s politicians want their wealthy state to not have to deal with the rest of Spain’s debt-ridden baggage. As The Economist is quick to note, the decades-long hypothetical, armchair separatist initiative was powered by two recent factors: “Spain’s economic woes and a 2010 Constitutional Court decision to strike out part of a renewed charter of self-government that had been approved at referendum.”

When the microphone is live, however, you have to pay attention to all things. Here in Austin, Texas, I’d love to laugh at certain hardliner libertarians, but articles about why 79-year-old former Texas congressman Ron Paul should be president won’t leave my timeline.

It’s worth hammering home how quickly these ideas can gain footholds in a place like Texas, where everything gets downvoted to oblivion by straight party ticket votes in rural and suburban areas. Former radio shock jock Dan Patrick, who is a documented racist, sexist homophobe, can just put an R next to his name on the ballot and become lieutenant governor.

Alex Jones went from cable access goofball that would come into my South Austin drive-thru window in a black SUV to order cheeseburgers in early 2002 to running an InfoWars media empire and enjoying a quarter million Twitter followers. Most alarmingly, the Texas Nationalist Movement got a voice on CNBC instead of a round of Pearls on the house so that the asshole at the end of the bar will shut the fuck up.

The noise and signal provided by the Internet age is where opportunity strikes. Catalonia’s is here.