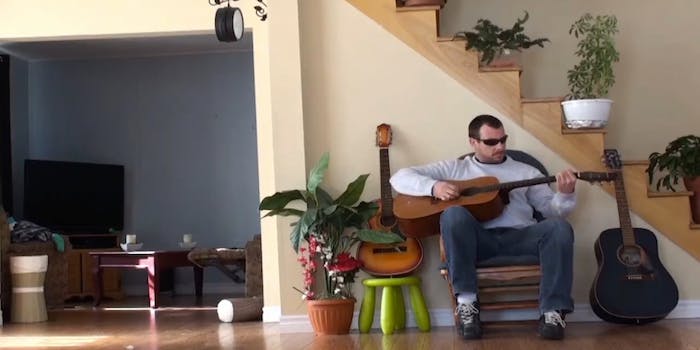 Nothing’s better than sweet revenge—especially when it’s dished out by the animal kingdom.

At face value, it’s a classic case of instant karma. A guitar player who, for some reason, is wearing sunglasses indoors, kicks his cat out of his seat so he can film himself practicing. With a poorly placed potted plant and an perturbed cat out for revenge, it only takes seconds before he gets his due.

But is this even real?

Sure, that guy ends up getting rewarded for both seemingly pissing off his cat and putting his chair directly in the line of fire, but as commenters are pointing out, the video looks like a fake.

Take the actual crash, for instance. Keep an eye on the top potted plant in the frame, located two steps above the getting the brunt of the cat’s “rage,” and see if anything jumps out.

They’re suspicious that the guitar player would wait until after he turned the camera on to remove the cat from the chair. It’s a little harder to tell if all of the plants are real, but the one that fell is clearly fake, with a tag attached to it—and no dirt. And why would a cat wait until its owner sits down and starts playing? We already know that they’re not especially fans of music.

And if nothing else, we have the reasoning. Nothing says Internet gold than an animal getting his due for being slighted by an owner.