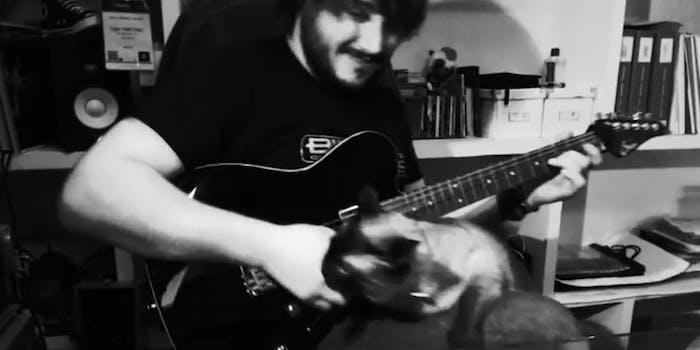 This guitar player is trying to shred, but his cat has better ideas

The marriage between cats and music continues to strengthen. First, YouTube introduced us to Bailey, who (apathetically) played the drums along with some death metal. Now all this kitty wants to do is help his owner shred on his guitar. Or claw the living s**t out of him.

According to Spain-based musician Tony Martinez, the video of his cat interrupting his guitar playing has already gone viral on Facebook. With over 74,000 views so far on YouTube, it appears that the process will repeat itself as cat lovers and music lovers alike tune in to see Martinez’s backup guitarist.

The next time you’re at a concert and the arena claims that the band is having “technical difficulties,” it may not necessarily be a mechanical issue with the sound system. Rather, it may be because the band is trying to coax a groupie kitty off of the keyboard.