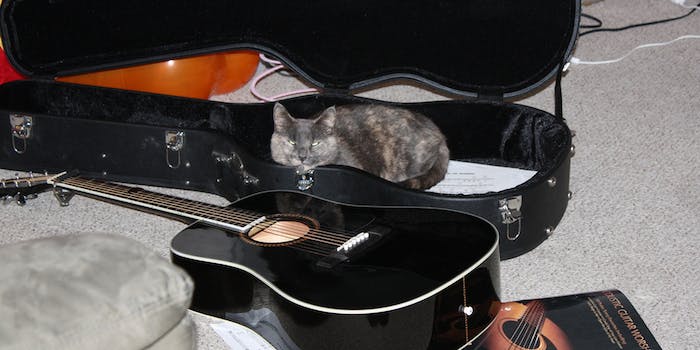 People are playing their cats like instruments for ‘Cat Band’

What if we used cats as musical instruments? It sounds like an idea born on night of heavy drinking. Only unlike most of those terrible ideas, this one actually make it Tumblr by way of “Cat-band.”

It’s exactly what it sounds like: user-submitted videos of cats taking the place of musical instruments.

The idea was based on user julieamalone’s video of her playing her cat as a ukelele. To join the cat band, all you need to do is play a song with your cat substituting for your guitar, saxophone, harpsichord, etc. Upload the video to Instagram and tag it with the hashtag #catband (amazingly, it wasn’t already taken).

Fortunately, the creator of Cat Band understood from the very beginning that being a cat-struments might be a tad uncomfortable for felines, particularly when it comes to being a drum or accordion. Thus, the site insists “please don’t hurt your cats; that would be super lame.”

With animal welfare advocates (presumably) satisfied with the disclaimer, people can now enjoy the abject entertainment that only comes from Instagrammers using their cats as cellos, a “sexy sax” (I don’t even want to know), and even a harmonica.

While cat-struments may be a breakthrough in music, it’s probably best that other performers don’t adopt the idea. The last thing we need is some stand-up comic shouting bad jokes into a cat microphone.