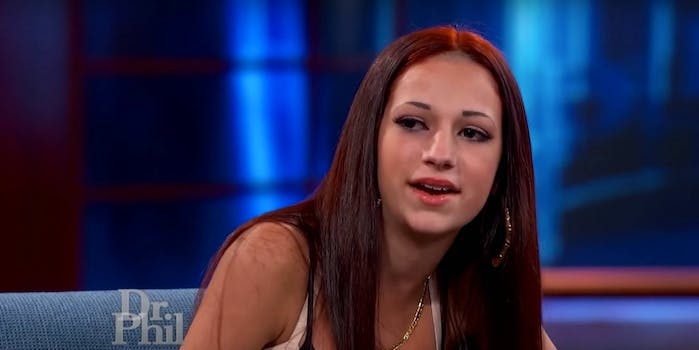 Meet the teen behind ‘Cash me ousside, howbow dah,’ the internet’s favorite threat

It started with a stint on 'Dr. Phil.' Then it took on a life of its own.

Let’s say somebody looked at you the wrong way. Or maybe your debit card betrayed you by declining your single-item transaction. Or perhaps you’re a street-smart teenager on The Dr. Phil Show getting sassed by an audience of know-it-all older women. How do you respond?

Quite easily, actually, with one simple comeback:

@ the barber who fcked my hair up CASH ME OUTSIDE HOWBAWDAH ?!? pic.twitter.com/ceZPRypQst

McDonald's: Our ice cream machine is broke sorry about that
Me: cash me outside howbout dat pic.twitter.com/LWxjXiQxv4

It’s the perfect phrase to combat any perceived slight, big or small. Feeling deliberately attacked? Or maybe just a little peeved that someone’s inconvenienced you? “Catch me outside,” you tell them, challenging them to a fight. “How about that?”

Take it from Danielle Peskowitz Bregoli, an “out of control” 13-year-old whose Dr. Phil episode aired last September. In the episode, Bregoli’s mom, Barbara Ann, says she’s at the end of her rope: Her daughter has stolen her car, her credit card, and she doesn’t know how much longer she can parent her child.

Though the episode clips on YouTube capture a few meme-worthy moments (you can watch all of them here, compiled into one YouTube playlist), it’s Bregoli’s half-hearted threat to an audience of snickering “hoes,” evidence of her dirty attitude, that launches her into internet memedom.

In this clip of the episode, Bregoli makes her argument against her mother and ends up making enemies with the audience after a few chuckle at her “street” accent and loud personality. A roar of applause causes Bregoli to shout.

“Cash me ousside, howbow dah?” she seems to say. Of course, we all understand she’s saying, “Catch me outside, how about that?” But Dr. Phil makes her repeat the phrase, then asks her to explain it.

Though many of Dr. Phil’s guests are like Bregoli and her mom, fighting at wit’s end, or young and reckless, for whatever reason Bregoli’s threat resonated widely and seemed to stick. According to Know Your Meme, “cash me ousside” traveled through Memecrunch and Instagram before gaining wide popularity on Facebook, then exploding on Twitter.

Bregoli, “aka BhadBhabie aka SlimThugga,” as she called herself, told the Daily Dot via email that she found out about the memes through Facebook and finds them funny, as do her friends and Barbara Ann. The teen hasn’t shied away from her newfound stardom, too, and even has a verified Instagram account to show for it.

Posted by digitallmemes on Thursday, January 5, 2017

Posted by Catch Me Outside, HOW BOUT DAT on Saturday, January 21, 2017

to those little girls that came to the store and messed up the whole store….cash me outside howbah dat pic.twitter.com/AsJygZssyK

Roses are red
My President is black
Give Obama another term
Or cash me outside how bow dah pic.twitter.com/Z2FOOjgion

*Asking for a water cup and filling it with soda*

"Dats what I always do an dey never cash me, ain't nobody gon cash me" pic.twitter.com/crlzfrnsHr

This chick in my class said it's refreshing to have Trump as president because of his lack of political knowledge cash me outside howbow dat pic.twitter.com/FSP8YfykFi

my male cousin: omg you can't fight me. girls don't fight
me: cash me ousside how bow dah pic.twitter.com/ugr5lLgiIt

While the complete “cash me ousside, howbow dah” phrase is typically understood as a challenge, “howbow dah” alone can be reserved for proposing alternatives that you’d rather see happen.

Be my valentine howbow dah

Another clip from Bregoli’s Dr. Phil episode, in which she threatens the camera crew, has also sparked similar memes.

They’re not as prevalent as Bregoli’s first threat, but they’re just as iconic.

when sugar is going down pic.twitter.com/5gGt3v8xAg

when I go to the park n they have swings pic.twitter.com/B7Lvij3h8n

me after watching that video of the dog getting pushed in the water #BoycottADogsPurpose pic.twitter.com/Qg7rbhGPre

Like all good memes, Bregoli’s catchphrase has been overplayed by some.

She’s even been turned into a song, the true test of internet virality.

Nonetheless, Bregoli’s stint on Dr. Phil left an amusing impression on the internet, even if the same can’t be said for the talk show host’s affect on Bregoli herself.

“Imma just do me. I am who I am and people can like it or not,” Bregoli said.

When asked if being on the show had led her to rethink her actions and go back to school, she replied, “Hell fuck no. Yea I’m going back to school. Probably home school though.”

Update 3:45pm CT, Feb. 2: On Thursday, the Dr. Phil Facebook page announced that Bregoli will be back on the show shortly following her rise to internet fame.

Update 1:08pm CT, Feb 4: Now, you can buy your very own Cash Me Ousside merchandise. Bregoli has teamed up with  L.A.-based design and production brand PizzaSlime to create T-shirts, hoodies, throw blankets, and ceramic plates.

Update 10:00am CT, Feb 7: TMZ reported that Bregoli has cashed a woman inside a Spirit Airlines plane at LAX airport on Monday, requiring police to remove her, her mother, and the woman from the airplane after the physical altercation.