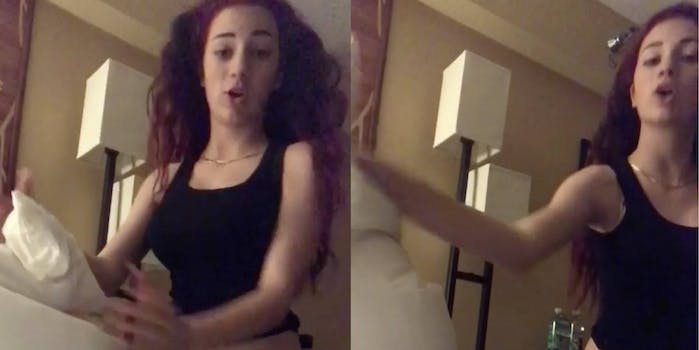 “Cash me ousside, how bow dah?” teen Danielle Peskowitz Bregoli is a girl of her word. The teen behind 2017’s first fire meme and her mother, Barbara Ann, were booted from a Spirit Airlines flight on Monday evening after getting into a physical fight with another passenger, TMZ reported.

According to TMZ, Bregoli and her mom were boarding the flight when her mom got into an altercation with another female passenger. Barbara Ann was allegedly having difficulties storing her carry-on baggage in the overhead compartment because of a walking cast on her foot, and the third passenger was getting restless.

Bregoli then punched the woman after she put her hands on Barbara Ann’s throat. The woman made a citizen’s arrest, after which police removed all three passengers from the plane. TMZ reported no one pressed charges and instead all “decided their lawyers would handle it from here.”

All three are now banned from using Spirit Airlines for life.

In addition to getting the last swing, Bregoli also got the last word in, posting a “reenactment” detailing the altercation, with the help of a trusty pillow.

In Bregoli’s word, the third passenger was a “drunk crackhead” who was saying she wanted to fight Bregoli, to which Barbara Ann threatened her, “Put your hands on my kid.” Barbara Ann then put her hand on the woman’s throat, not the other way around as TMZ reported, causing the woman to push Barbara Ann back into her daughter.

That’s when, without warning of her second signature catchphrase, Bregoli started swinging, and brought her arm straight down on the woman’s head.

Though Bregoli took down the Instagram video in question (it was up for six hours before being removed) someone happened to catch the situation on the airplane. The video shows Barbara Ann lunging toward someone as Bregoli screams, “What’s up ho, what’s up?” although Bregoli’s swing was blocked by bystanders.

Let this be a word to the wise: under no circumstances should you ever, ever, try to actually cash this girl—inside, ousside, just don’t.

Spirit Airlines’s media relations manager and a press contact for Bregoli did not immediately respond to requests for comment.

Update 1:45pm CT, Feb. 7: A representative for Spirit Airlines responded to a request for confirmation of the incident with the following statement.

“Police removed three passengers from Spirit flight 310 during the boarding process at LAX Monday night following an altercation. The customers were refunded and refused service.”