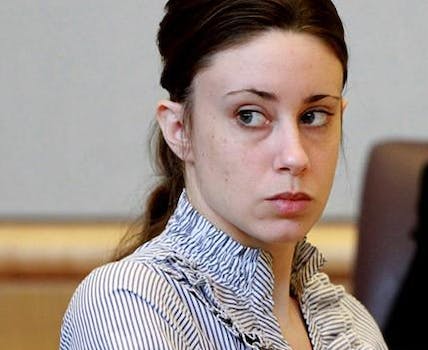 Someone Googled "fool-proof suffication" the afternoon her 2-year-old daughter disappeared.

Acquitted murder suspect Casey Anthony may have beat charges because a police investigator forgot to check her personal computer for secondary Internet browsers.

The Florida woman, charged in 2008 with the killing of her 2-year-old daughter Caylee, was acquitted in 2011—though she was convicted of misdemeanor counts of providing false information to police officers—and set free, though new information concerning the investigation suggests that Anthony may have actually committed the crime.

According to Orlando’s WKMG, Anthony made a Google search for “fool-proof” suffocation methods on the last day her child was spotted alive.

The search, made on her home computer’s Mozilla Firefox browser, was overlooked by police investigators who sorted through her computer because they reportedly only looked into the search history found on the computer’s Internet Explorer browser, the browser that comes pre-installed on Windows-equipped computers.

Such information came to light after Jose Baez, Anthony’s defense attorney, wrote about the search in his recently released book, Presumed Guilty.

In it, he wrote about how Anthony’s defense team had prepared for a line of questioning on the search because, as he attested, her father George Anthony was considering suicide at the same time that Caylee accidentally drowned in the family swimming pool, as the family and defense argued.

As Tony Pipitone reported, someone logged into Casey Anthony’s password-protected computer at 2:49 pm on Monday, June 16, 2008, and ran a search for “fool-proof suffication” [sic] before clicking on an article that criticizes pro-suicide websites “that include advice on ‘fool-proof’ ways to die.

A minute after the suffocation search, the browser recorded activity on MySpace, which Casey Anthony used frequently and her father did not.

“There was an oversight,” Orange County sheriff’s Captain Angelo Nieves told WKMG in an understatement. “This has been a learning experience for investigators as well.”

“I don’t understand how no one ever knew about this evidence,” Baez said. “We were keeping it close to the vest and ready to counterpunch in the trial, and it never came out.”