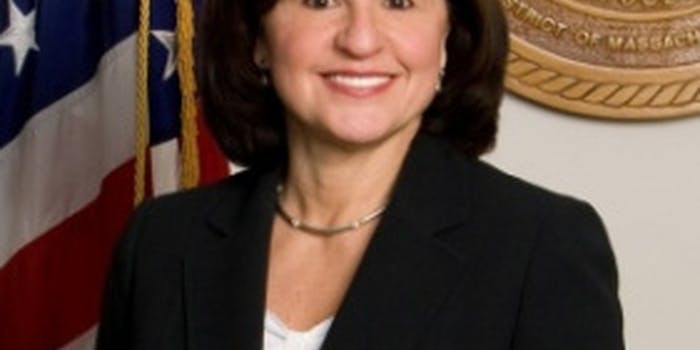 Prosecutor in Aaron Swartz case releases statement on his death

Carmen Ortiz says her office's conduct was "appropriate in bringing and handling this case."

The office of Massachusetts district attorney Carmen Ortiz has finally released a statement on the death of Aaron Swartz.

Swartz, a 26-year-old digital rights activist, killed himself on Jan. 11 just months before his trial on felony hacking charges was set to begin. If found guilty of all 13 counts, he would have faced a maximum of 35 years in prison and a $1 million fine.  In early 2011, Swartz broke into an MIT closet and scraped millions of academic journals from the non-profit digital archive JSTOR. After JSTOR learned of his identity, Swartz handed over the files, settling independently. When JSTOR learned of the federal indictment, it urged the district attorney’s office to drop the case. But the government barrelled ahead anyway, filing an indictment against Swartz in July that alleged he planned to distribute the articles on peer-to-peer file exchange networks like BitTorrent.

Since Swartz’s death, critics have roundly condemned the government’s handling of the case. They’ve noted that Swartz faced crippling legal fees, a $1 million fine, prison time, and the branding of “felon” for essentially violating JSTOR’s terms of service. Ortiz’s official response, below, emphasizes that her office would have recommended a reduced prison term of six months in a minimum security prison.

“I must, however, make clear that this office’s conduct was appropriate in bringing and handling this case,” Ortiz wrote.

The statement does not, however, address the most germaine criticism levelled at Ortiz, that her office lacked prosecutorial discretion. Why throw the book at a man whose crime had no true victim? That’s a question Swartz’s supporters may need to wait a long time to have answered.

Read the full statement below.

As a parent and a sister, I can only imagine the pain felt by the family and friends of Aaron Swartz, and I want to extend my heartfelt sympathy to everyone who knew and loved this young man. I know that there is little I can say to abate the anger felt by those who believe that this office’s prosecution of Mr. Swartz was unwarranted and somehow led to the tragic result of him taking his own life.

I must, however, make clear that this office’s conduct was appropriate in bringing and handling this case. The career prosecutors handling this matter took on the difficult task of enforcing a law they had taken an oath to uphold, and did so reasonably. The prosecutors recognized that there was no evidence against Mr. Swartz indicating that he committed his acts for personal financial gain, and they recognized that his conduct – while a violation of the law – did not warrant the severe punishments authorized by Congress and called for by the Sentencing Guidelines in appropriate cases. That is why in the discussions with his counsel about a resolution of the case this office sought an appropriate sentence that matched the alleged conduct – a sentence that we would recommend to the judge of six months in a low security setting. While at the same time, his defense counsel would have been free to recommend a sentence of probation. Ultimately, any sentence imposed would have been up to the judge. At no time did this office ever seek – or ever tell Mr. Swartz’s attorneys that it intended to seek – maximum penalties under the law.

As federal prosecutors, our mission includes protecting the use of computers and the Internet by enforcing the law as fairly and responsibly as possible. We strive to do our best to fulfill this mission every day.

Photo via Department of Justice