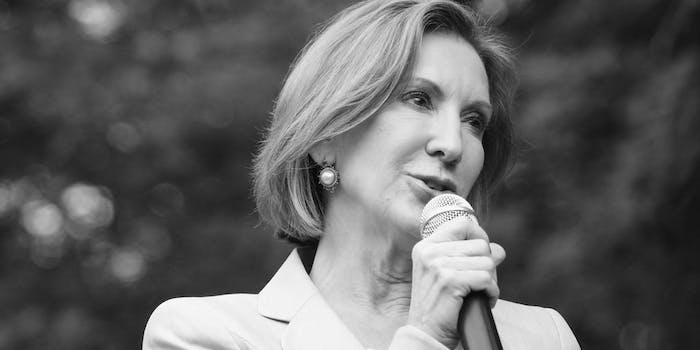 After the debate, everyone changed handshakes and hugs. But one person was missing.

Both Fox News’s Brit Hume, Glenn Beck and CNN all argued that the former Hewlett-Packard CEO was the clear standout in the CNN-hosted contest, the second of the 2016 presidential race, and a poll from Google Consumer Surveys shows viewers agree: 30.3 percent gave a thumbs-up to Fiorina’s debate performance, while 22.6 percent said Donald Trump was the winner. Ben Carson and Sen. Marco Rubio (R-Fla.) scored 11.6 percent and 10.7 percent, respectively.

With that, Carly Fiorina just needed a mic to drop. #winner #GOPDdebate

But if Fiorina was the victor, it would be hard to tell from the way she was treated onstage—and there was one moment that illustrated this problem perfectly. After host Jake Tapper asked one last question about what each candidate’s presidential legacy would look like, the men on the stage embraced each other—hugging, shaking hands, and patting each other on the backs.

It was similar to the message of camaraderie that the GOP candidates espoused throughout the debate, one of support rather than antagonism. In his opening statement, former Arkansas governor Mike Huckabee told the audience: “I’m delighted to be here with all of these guys, and would put any of them in an administration that I led,” calling his fellow Republicans the “A-Team.”

His comments were well-received in the room, but there’s one problem with his analogy: The A-Team was a bunch of dudes. While that’s not what Huckabee meant, he’s accidentally more right than he knows.

Where was Carly Fiorina during the post-debate love session? She was off to the side, struggling to force her way in. Eventually she was tepidly accepted into the fray with a polite handshake from Trump, but this telling incident is the ultimate symbol for the 2016 race. While Donald Trump’s sexist comments have made headlines, his woman problem isn’t the only one worth talking about.

The men on the stage embraced each other—hugging, shaking hands, and patting each other on the backs.

Let’s contrast Fiorina’s tentative acceptance with the interactions between her male peers throughout the evening. While candidates like Sen. Rand Paul (R-Ky.) and Trump often came to blows—especially during a Trump dig about Paul’s polling numbers—the men on stage fist-bumped each other in between jabs, like members of a college debate team prepping for the big match.

After Trump and Ben Carson exchanged words over the mandatory vaccination debate, the two exchanged an awkward high-five. After all, who wants to let a silly thing like an “autism epidemic” break up a perfectly good bromance?

But Donald Trump would have another chance to perfect his skills later in the debate, when Tapper asked the candidates a ridiculous softball question about what they would want their “Secret Service code name to be as president.” Former Florida governor Jeb Bush responded that he would choose “Everready”: “It’s very high energy, Donald.”

This moment was more than product placement: Bush was striking back at Trump’s criticisms that Jeb has run a “low-energy” campaign, and the Donald clearly approved. He smiled enthusiastically and patted him on the shoulder, before giving Jeb Bush a spirited low-five. The grin on Bush’s face was akin to a math nerd finally getting the respect of the most popular guy in class.

If the GOP is a boys club, it’s clearly struggling to figure out what to do with a capable, intelligent female person—so much so that the candidates embarrassingly fumbled a question about which woman should replace Alexander Hamilton on the $10 bill. A few of the candidates said Rosa Parks, and Rand Paul cast an indifferent vote for Susan B. Anthony, who “might be a good choice.” But many said their spouses, mothers, and daughters—because thinking of literally any human woman not in some way related to them was too hard.

Here’s Mike Huckabee on the subject: “I’d put my wife on there. I’ve been married to her 41 years. She’s fought cancer and lived through it. She’s raised three kids and five great grandkids. And she’s put up with me.”

After all, who wants to let a silly thing like an “autism epidemic” break up a perfectly good bromance?

In her galvanizing speeches last night, Carly Fiorina vowed to take on Washington—using her outsider status to combat decades of toxic complacency and corruption—but her biggest fight may be, thus, against the lazy sexism of her own party.

Last night, Fiorina seemed to score points by striking back against Trump’s awful comments about her appearance. The CEO recently told Rolling Stone magazine, “Look at that face! Would anyone vote for that?” During the debate, Carly Fiorina responded: “I think women all over this country heard, very clearly, what Mr. Trump said.”

The applause was huge, but it wasn’t nearly as deafening as the response to her shots at Planned Parenthood. We like it when you stand up for women, but we like it even more when you declare war on them.

And there’s been no war more potent during the 2016 elections than Trump’s continued attacks on women he disagrees with. His Rosie O’Donnell comments during the initial Fox News debate arguably got an even bigger response from the audience. When moderator Megyn Kelly brought up Donald Trump’s history of “[calling] women fat pigs, dogs, slobs, disgusting animals,” the former host of The Apprentice responded: “Only Rosie O’Donnell.” In a series of tweets, he later turned that vitriol on Kelly herself and has yet to apologize for it.

Instead of hurting him in the polls, it’s only helped him—and will likely keep boosting his numbers. One overlooked statistic from last night’s CNN debate is that in the Google poll, Donald Trump was still in a statistical tie with Carly Fiorina when it came to male viewers. The question Trump posed to Rolling Stone might have been offensive, but based on those numbers, clearly a lot of people agreed with him. America’s GOP boys club is a lot bigger than we think.

Last night, Carly Fiorina proved that she deserved to be on that stage, but the smartest woman in the room clearly has a long way to go before she gets the recognition—or the hearty fist bump—she deserves.