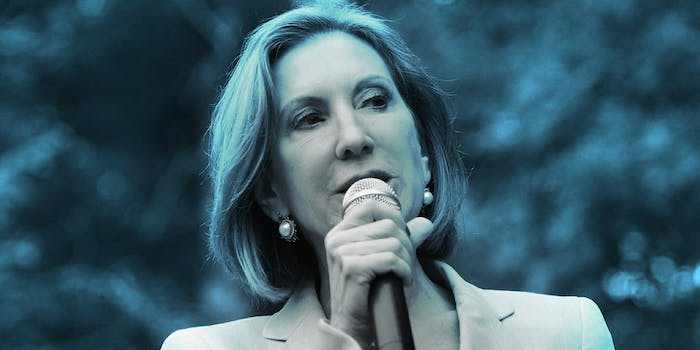 The 2016 candidates will rake in $10 billion in donations—so why can’t they pay their staff?

Twitter is criticizing Carly Fiorina for being slow to pay off her 2010 campaign debts—but she's not the only one.

According to a recent report from the Washington Post, Carly Fiorina’s claims of fiscal acumen, keen management skills, and all-around professionalism are undercut by a concerning situation dating back to her failed 2010 Senate run. After facing off against California’s longtime Democratic Senator Barbara Boxer—a campaign in which she suffered a 10-point defeat—the former Hewlett-Packard CEO reportedly failed to pay a slew of her campaign staffers some $500,000 owed to them.

The report cites 30 invoices that Fiorina left unpaid for years. In a particularly shocking example, when senior adviser Joe Shumate suffered a fatal heart attack during the final weeks of her campaign, his last $30,000 paycheck wasn’t handed over to his widow, despite Fiorina publicly offering her “sincerest condolences.” Fiorina finally paid down her debts in advance of her presidential campaign launch earlier this year.

While Fiorina’s money troubles have attracted criticism on Twitter, none of this is particularly new news. Fiorina’s status as a years-long debt welcher had already been well-documented on the Internet—she was even asked about it by well-respected conservative radio host Hugh Hewitt back in January, as the San Francisco Chronicle’s Debra Saunders detailed at the time. But more importantly, the fact of unpaid bills is much bigger problem in politics than Fiorina’s campaign. She might seem uniquely, inexcusably negligent, but when it comes to campaign debts and late paychecks, Fiorina is hardly alone.

Correction: Carly Fiorina has paid off her 2010 campaign debt. Took her four years. She paid herself first. She is still a liar.

After making no payments to her 2010 debt for 2 years, Fiorina paid them in Jan http://t.co/yyd5grAbCE w/ @HallieJackson @shaqbrewster

In the case of Rick Perry, the former Republican governor of Texas was surprisingly upfront about the fact that his funding dried out. By August, the tides had so thoroughly turned against the presidential hopeful that he ceased paying his staff altogether. Katon Dawson, Perry’s former campaign chairman in South Carolina, told the Washington Post, “Money is extremely tight. We all moved to volunteer status.” This tenuous state of affairs continued until Perry dropped out of the race a month later.

Former Minnesota representative Michele Bachmann was faced with a similar situation during her 2012 presidential campaign. Many of the Republican candidate’s high-level staffers abruptly jumped ship after reportedly going unpaid for more than a month, a fact which seemed to take the candidate by surprise. “That is a shocking story to me,” Bachmann told Iowa Radio when confronted with the news. “I don’t know where that came from.”

In a more comical example, there was Florida Gov. Rick Scott’s 2010 gubernatorial campaign. Scott’s on-the-ground volunteers were reportedly compensated in American Express gift cards instead of checks, a form of payment that comes with a built-in surcharge. Scott’s team promptly did damage control when the story broke, saying that the campaign would exchange the cards for checks, but the fact that they had to correct the error at all is extremely telling about the state of presidential campaigns.

Lest you think this is a strictly partisan issue, Democratic president frontrunner Hillary Clinton isn’t immune to these criticisms either. While her 2016 campaign hasn’t been accused of failing to cash checks, the Guardian reported that Clinton’s bid has long been reaping the benefits of “free help,” including from staffers with prior campaign experience. “From their perspective, they’ve got to put in their time in this campaign now to get hired later,” political strategist Kevin Geiken told the Guardian.

She might seem uniquely, inexcusably negligent, but when it comes to campaign debts and late paychecks, Fiorina is hardly alone.

While the Guardian report argued that it’s not just young people who are getting the shaft—fresh-faced recent graduates looking for whatever political experience they can get—this is a situation millennials have long dealt with. When it comes to young workers, there’s a growing culture of unpaid labor in this country, as the oft-maligned millennial generation has essentially been forced to accept this uncertain new reality, mainly through internship programs.

Even accepting that financial insecurity is common in politics as well as everyday life, however, there’s no mistaking why this Fiorina story is so potentially damaging. It’s one thing to run out of money like Perry and hope that loyal, true believers will stick behind you as long as they can. But according to former campaign manager Martin Wilson, Fiorina just didn’t want to pay up. He told the Washington Post that he’d sometimes call to remind her that she needed to make good on the debts, but “she just wouldn’t.”

In response, Carly Fiorina has yet to offer a compelling reason for her delinquency. Instead, the candidate chose to strike back at Washington Post itself. “I don’t think the Washington Post has much credibility anymore,” Fiorina told the press. Her Twitter account has been silent on the issue.

And there’s a reason for that: As revealed in a “personal financial disclosure report” Fiorina leaked to the Internet in June, she and her husband (former telecom executive Frank Fiorina) boast a net worth of about $59 million. If she’d really wanted to, she could’ve cut those checks herself. The situation could have, thus, been resolved in a week. When Hewitt asked her about her campaign debts back in January, she responded by mentioning Hillary Clinton’s own years-long process of paying down her 2008 tab. But Clinton’s campaign left her $25 million in the red. By comparison, Fiorina only had to pay down $500,000.

As an unnamed political adviser argued in the Guardian report, this isn’t just a question of finance—it’s also one of ethics. “It is a really terrible way to treat the most vulnerable people on campaign staff and makes me question their leadership on everything else,” he said.

While Carly Fiorina has got a lot of uncomfortable questions that need answering, Americans are about to be faced with a whole lot more of them: Politicians are projected to spend a record $10 million during this election cycle. In their bids for the presidency, former Florida governor Jeb Bush and Hillary Clinton are each estimated to run up $2 billion tab. If that seems like a lot of money floating around, we need to start asking how politicians keep spending so much on everything but the very people who help keep their campaigns running.