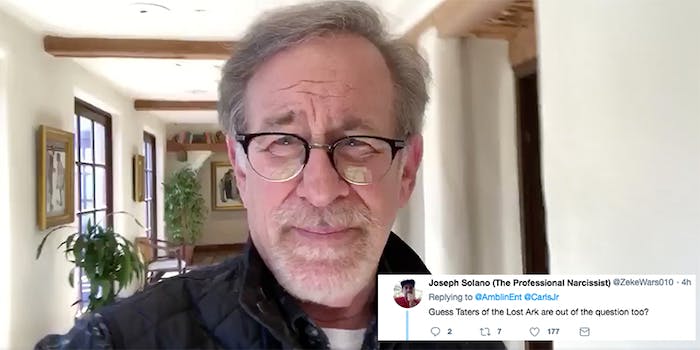 Steven Spielberg says he wants nothing to do with Carl’s Jr. ‘SpielBurgers’

Carl’s Jr. announced Monday it would be changing the name of its $1 Charbroiled Burgers to SpielBurgers in anticipation of Steven Spielberg’s coming film Ready Player One. But the prolific film director isn’t having it (or so he says).

Spielberg tweeted a selfie video via Amblin Entertainment on Tuesday with his “official statement.”

“They’re pretty good, but I’m passing,” Spielberg said about the SpielBurgers. “Cease and desist, you can’t do it, sorry guys.”

With his response, the SpielBurger plot thickens.

Following the video, people on Twitter rolled in the rhetorical response wagon with other ideas for products incorporating Spielbergisms.

Idk I've seen two of those already. Yours would be the third kind.

Some had advice for Carl’s Jr. Why not just call the burger Señor Spielbergo, of Simpsons fame?

People also said they were impressed with Spielberg’s command of the selfie video–but, duh? He’s won three Oscars for filmmaking.

It's surprising me how tech-savvy Spielberg is he's like an OG millennial who new?

The question is, what’s Carl’s Jr.’s move now? USA Today reported earlier this week that the fast food chain has a licensing agreement with Ready Player One. So the director could just be trolling to play the PR game.

Imagine being one of the greatest artists in your medium and being reduced to having to do this.

“Hey y’all… it’s ya boy Vinny Van Gogh here. The folks at Dannin are trying to rename gogurt to Van Goghgurt… love the intentions but I’m lactose so…”

The stuffiness factor of saying “cease and desist” in a video responding to a fast food joint on Twitter is compounded by the “look how long my hallway is”-ness of the shot.

But if Carl’s Jr. really has to rescind its menu change, here’s the second-best option.