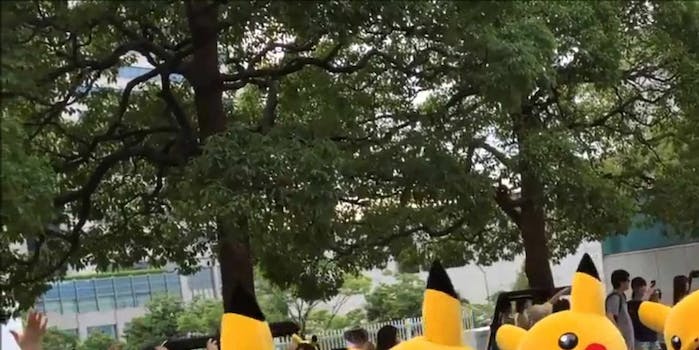 We don't need updated standards for how women look or act. We need to scrap those standards altogether.

Strong is having a moment. It seems like no matter where you look, the word “strong” is being suggested as a replacement for a whole host of adjectives traditionally used to compliment women. Social media feeds are flooded with aspirational hashtags like #StrongIsTheNewPretty and #StrongIsTheNewSkinny. Parents are exhorted to praise the strength of their daughter’s bodies rather than their appearance.

And, of course, there is the endless discussion about the value of Strong Female Characters—you know, the ones who wear army boots and have perfected the art of fiercely jutting out their chins. You might as well call it Strong Is The New Character Development, wherein any attempt to make a female character interesting or relatable is jettisoned in favor of making the sure the audience knows that this is a Kick-Ass Babe. As the Dissolve’s Tasha Robinson explained, the term is “just as often used derisively as descriptively, because it’s such a simplistic, low bar to vault, and it’s more a marketing term than a meaningful goal.”

It seems like no matter where you look, the word “strong” is being suggested as a replacement for a whole host of adjectives traditionally used to compliment women.

Oscar-nominee Carey Mulligan recently spoke out about the double-edged sword of “strong” women. In an interview with Elle UK about her role in the upcoming movie Suffragette, Mulligan said: “The idea that women are inherently weak—and we’ve identified the few strong ones to tell stories about—is mad.” And she’s right—the idea that strength is a trait men have by default and something women can only sometimes aspire to is both pervasive and damaging. But the issue with the way “strong” is applied to women also goes much deeper than that.

In theory, calling women strong is supposed to counter harmful stereotypes. It’s meant to decenter traditional ideas about femininity by pushing back on restrictive gender roles. Unfortunately, in practice, the term rarely does that. Instead, it often perpetuates the very stereotypes it’s trying to dismantle.

Take those #StrongIsTheNewSkinny memes. First of all, do they ever actually feature images of women who aren’t thin and rather conventionally attractive? In a Google search of most popular photos associated with the meme, nearly every single woman is skinny, white, blonde, and beautiful. Of course, there’s nothing wrong with being skinny or beautiful, but it seems ridiculous to posit that strong is the new skinny when strong actually seems to be the same old skinny after all. Is there really such a vast difference between telling women to aspire to one idealized body type and telling them to aspire to a slightly different one?

In a 2014 paperback, Jennifer Cohen and Stacey Colino extol the virtues of powerful women—in order to sell a fitness regiment. The book’s Amazon description is extraordinarily telling:

Sick and tired of hearing what’s wrong with you and your body? You’re not alone. It’s time for a new conversation—and a new plan for treating, feeding, and moving your body in ways that build on your strengths inside and out. Strong is sexy. Strong is powerful. Strong is achievable. With Strong Is the New Sexy, you can say goodbye to body-bashing and physical faultfinding, and instead learn to embrace, not just how it looks, but what your body can do—from pushups to pull ups and box jumps to rope climbs, nothing is out of your reach.

While I understand that these messages are meant to feel empowering for women, it’s just another way of telling women what is and isn’t acceptable. What about the women who, for whatever reason, aren’t able to exercise? These women might be “sick and tired of hearing what’s wrong” with their bodies, but does telling them what’s wrong in a new way and, thus, adding to their shame really help?

The Strong Female Character trope doesn’t fare much better. Much like #StrongIsTheNewSkinny, Strong Female Characters in films and books offer little variation in the types of women they represent. As Sophia McDougal put it in an essay for the New Republic, a character like Sherlock Holmes is allowed to be “brilliant, solitary, abrasive, Bohemian, whimsical, brave, sad, manipulative, neurotic, vain, untidy, fastidious, artistic, courteous, [and] rude.” McDougal writes, ”Adding the word ‘strong’ to that list doesn’t seem to me to enhance it much.”

While I understand that these messages are meant to feel empowering for women, it’s just another way of telling women what is and isn’t acceptable.

In contrast, if you were to line up all the Strong Female Characters side by side, you would find that they act and look remarkably similar. Robinson names a number of examples of Strong Female Characters who are strong in name only, what she calls examples of the “Trinity Syndrome.” These are women like Galadriel in Peter Jackson’s Hobbit prequels, Dahl in Riddick, and Carol Marcus in Star Trek: Into Darkness. All of these women are young, white, thin, able-bodied, and conventionally attractive, wearing clothing designed to please male audience members. In a much-criticized scene from Into Darkness, Marcus is depicted in her skivvies for no apparent reason at all.

In a 2006 speech, creator Joss Whedon gave a famous reply to the question: “Why do you always write these strong women characters?” He answered, “Because you’re still asking me that question.” But what most people forget is that this response is one of several examples offered throughout the speech. No one ever cites the part where Whedon says he writes strong women “because they’re hot.” And make no mistake: Whedon’s heroines are hot—every single one of them fits neatly into the narrow confines of feminine beauty standards espoused by Cohen and Colino.

If Whedon thinks being strong is about being sexy, Kareem Abdul-Jabbar explains in an essay for Esquire that part of the problem is our singular definition of that term, which needs to reflect a greater diversity of character traits—as well as body types. Abdul-Jabbar writes:

But even more than that, we don’t need updated standards for how women look or act—we need to scrap those standards altogether. We need characters and memes that reflect the diversity of women’s lives. There is nothing wrong with being strong—as Abdul-Jabbar points out, strength is an admirable character trait—but we deserve images, characters, and ideals that are deeper than just one version of what “strong” is. We deserve women that seem real.