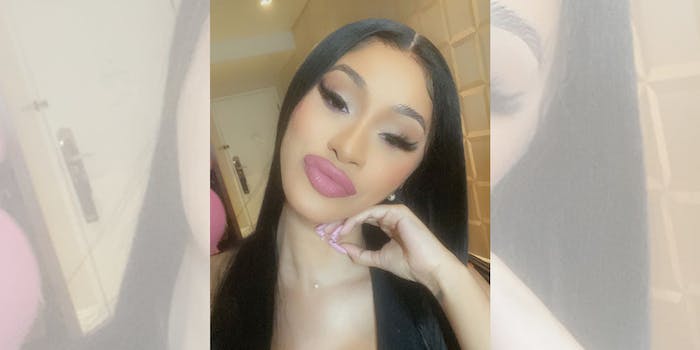 Cardi B called out for using racial slurs—again

'It’s very hurtful. Hopefully she doesn’t use the word again.'

Cardi B has come under fire for using a racial slur to describe her daughter’s eyes.

After her followers called her out for it, she took to Twitter to express her frustration. “I’m sick of the internet,” she wrote on Twitter.

She posted an edited image of her daughter, Kulture, showing what she would look like when she gets older based on two photos of Cardi and her husband, Offset. One user commented on the photo mentioning the similarities in Kulture’s eyes to that of Cardi’s sister, Hennessy.

“I think cause Hennessy got ch*nky eyes like Offset and so [does] KK,” Cardi replied on the post, “It’s the only [thing] I could think of.”

But after her followers pointed out the insensitivity of her word choice, she responded in now-deleted tweets, writing, “‘I didn’t know that ch*nky eyes was a slur like wtfff.  I [DON’T] KNOW F*CKING EVERYTHING!!”

The rapper later tweeted that she was “in such a bad mood today” and that she feels like “her old self today.” One of her followers responded, “Probably because people are [actually] holding you accountable for using a racial slur.”

This is not the first time Cardi has been called out for her racially insensitive language. But her fans were quick to come to her defense. A fan wrote on Twitter, “It’s definitely a racial slur, but I think Cardi just didn’t know. Apparently a lot of people don’t. I’ve been told I have ch*nky eyes and have been called a c*nk – it’s very hurtful. Hopefully she doesn’t use the word again.”