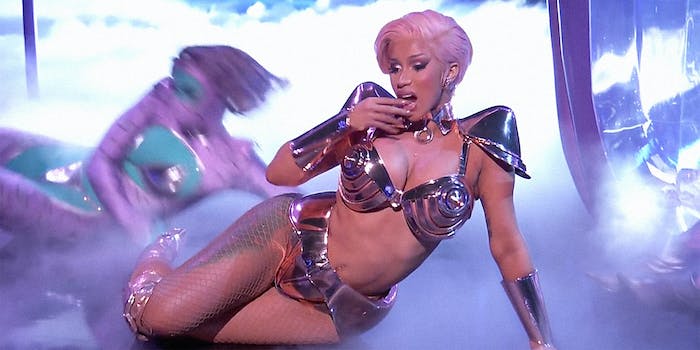 'This is why people gotta vote.'

There are a lot of issues Congress should be addressing right now, but earlier this week Rep. Glenn Grothman (R-WI) brought up a very pressing one: People calling his office about Cardi B’s month-old “WAP” Grammys performance.

In response to a tweet from reporter Molly Beck—who posted video of Grothman addressing the FCC about the performance and calling it “inconsistent with basic decency”—Cardi tweeted out her thoughts about his use of time.

“I think we all been on the edge this week since we seen police brutality back to back including watching one of the biggest case in history go down DUE to police brutality,” she wrote, “but wait! This is wat state representative decide to talk about.”

In a follow-up tweet, Cardi referenced Jacob Blake, a man shot by police in Kenosha, Wisconsin, last summer: “Mind you Nikkas can’t give a word about Jacob Blake or give him proper Justice but this part of the reason why !!!!! They giving seats to FUCKIN IDIOTS!!”

Grothman was called out last month by Del. Stacey Plaskett (D-Virgin Islands) after he claimed the Black Lives Matter movement “doesn’t like the old-fashioned family,” during debate about the COVID stimulus bill.