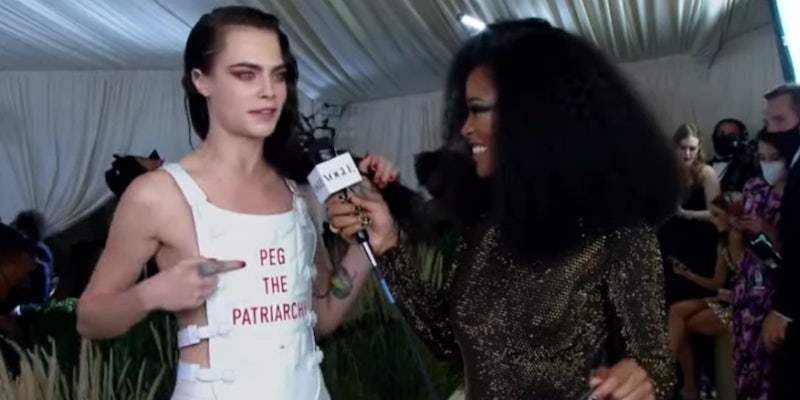 'It’s a bit like, 'stick it to the man,' Delevingne explained.

Rep. Alexandria Ocasio-Cortez (D-N.Y.) wasn’t the only one to turn heads by wearing a political message to the 2021 America-themed Met Gala at the Metropolitan Museum of Art. Cara Delevingne likewise stunned onlookers with her ensemble, however, she didn’t receive quite the glowing reception that AOC did.

The 29-year-old model walked the red carpet wearing a white bulletproof vest designed by Dior’s Maria Grazia Chiuri, embellished with the phrase: “peg the patriarchy.” It’s unclear if the messaging was directed specifically at the recent Texas abortion ruling or just an overall patriarchy catchall.

“If anyone doesn’t know what this word is, you’re gonna have to look it up because I’m not going to explain it right now,” Delevingne explained to Keke Palmer for Vogue magazine. “But ‘peg the patriarchy,’ it’s about women empowerment, equality, gender equality …. it’s a bit like, ‘stick it to the man.'”

Well, okay, sure. At the risk of editorializing, Delevingne’s explanation seems a bit lackluster for such a bold statement. But evidently, others thought so too, as the outfit began to make the rounds on Twitter, where it was largely mocked and ridiculed.

“If a Tumblr post from 2013 gained sentience,” quipped one user.

At any rate, and in something Cara Delevingne absolutely should have seen coming, others took the opportunity to swap out her “peg the patriarchy” message with … other messages.

Others were less amused by the outfit. Several people also called out Cara Delevingne out for the message being problematic for a number of reasons. (It’s worth noting that Delevingne does identify as bisexual and pansexual.)

On one hand, point to the lie. But on the other, isn’t that what people love so much about the Met Gala? “An aristocrat’s idea of what is ‘provocative and edgy'” is probably the most accurate summary of the event.

Update Sept. 14, 1pm CT: “Peg the patriarchy” is actually a trademarked phrase owned by sex educator Luna Matatas since 2015, as Vice reported. “It would’ve been so easy to credit me and to lift each other up through the message of dismantling patriarchy,” she told the publication.

Nicki Minaj accuses media of misrepresenting her views on vaccination

‘The Devil Wears Prada’ meme gets revived for fall