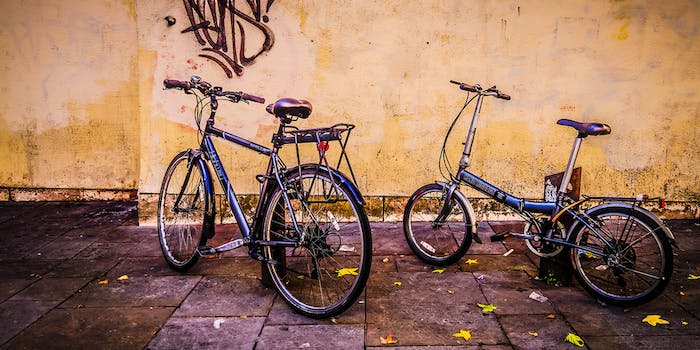 A city without cars is a disaster waiting to happen

It fixes a problem the rich don't have—while hurting the poor.

City planners are typically very good at being optimistic about the future of urban life. Since the 1930s, civic designers and forward-looking architects dreamed of futuristic utopias dictated by unbound technological progress and comfort for their citizens.

Today, the futurists promise us Rapture-style cities enclosed in a single structure, building upwards to combat growing overpopulation in Asia and beyond. These predictions have been beyond lofty—American cities, while safer, are paragons of income inequality, to the extent where we have become a nation of the very poor and the very rich.

Far from Frank Lloyd Wright’s vision of an expertly crafted suburban landscape, American cities are expensive playgrounds where the few live large and the rest struggle just to get by.

Since the 1930s, civic designers and forward-looking architects dreamed of futuristic utopias dictated by unbound technological progress and comfort for their citizens.

So a healthy dose of skepticism should meet the newest trend in urban planning: car-free cities. Across Europe, cities like Madrid, Paris, and Milan are recreating their urban environments to be more friendly to pedestrians and cyclists than they are to smog-puking cars.

New economic technologies such as Uber and traditional services like public transit are likewise making it more possible than ever to live in a city without a car. The trend stands to free up some of the most valuable real estate in the world by limiting need for streetside and lot parking, as well as removing the financial burden of car ownership from city residents.

While a lofty goal, discouraging car ownership in cities comes with an inherent burden, mostly for the poorest residents. Adjusting to the limitations placed on cars within these cities is often easier for the rich, denying the benefits of such programs to those outside the wealthy city center. Smaller, European-style cities have often retained a car-free environment—mostly benefitting from being so old they were designed without cars in mind—but most attempts to liberate the cityscape from automobiles are optimistic yet false assurances of how we can confront the daunting challenges of the future.

Car-free cities are not a new idea, and in prior attempts, such development has backfired on the poor and the cities trying to implement them. Mexico City has long tried to solve its problems of congestion and pollution by placing restrictions on when certain cars could be on the road.

By the 1980s, Mexico City’s air had accrued the hideous brown hue that now adorns cities like Beijing, due to a sudden boom in population and the city’s low geographic location in a valley. Starting in 1989, Mexico City banned each car from driving one day out of the week, and starting last year, the city began limiting how much a car could drive based on its age and emission ratings.

While logic would dictate that rationing car use (and the usage of older, smog-producing models) could make the air cleaner, the bans have largely backfired: Many families in Mexico City bought a second car to drive on the days they couldn’t drive their original. Traffic congestion went up, as did carbon dioxide levels. As the World Bank’s analysis of the program noted, “Greater use of old cars and increased weekend driving may have contributed to…high welfare costs and none of the intended benefits.”

American cities are expensive playgrounds where the few live large and the rest struggle just to get by.

Mexico City’s attempt to curb driving led to what economists and public policy analysts call “adaptation”: citizens worked around the restrictions rather than obeying them to the letter. As a 2007 report from the University of Michigan stated, “Drivers everywhere have a revealed preference for fast and convenient transportation and will find ways to circumvent rationing programs of this form.” Far from helping cities become cleaner, more efficient economic machines, such programs stand to “seriously undermine the potential benefits.”

Yet similar programs are being implemented around the world. As previously mentioned, Beijing became famous for its dangerously polluted air amid the 2008 Olympics. The Chinese government worked overtime to limit driving and industrial output to spare the world the image of their athletes running and jumping in air the color of pencil shavings.

Since then, the city has continued to issue license plates through a citywide lottery, one that has gotten tougher to win. Much like in Mexico City, however, Beijing residents have found multiple loopholes to the program and driving has gone up, not down.

Despite these failures, similar rationing programs are being developed in Sao Paulo, Bogota, and London and other cities struggling with overcrowded populations and dangerous levels of smog. A deeper level of understanding of human nature would reveal such programs force city dwellers to accept limits on their own mobility, a prospect that won’t be met well without viable, convenient, and affordable alternatives. If we are to accept car-free cities, they must come from people wanting to enjoy alternatives to having full control over their transportation.

Citizens worked around the restrictions rather than obeying them to the letter.

Hamburg, Germany’s designs of a greener city are likely the most optimistic yet also the most tantalizing. Hoping to drive up foot traffic, the relatively crime-free city is hoping to build a detailed, interconnected network of parks, playgrounds, and other open spaces over 40 percent of the city’s available land. Titled “grunes netz” (or “green power”), the program hopes to encourage foot traffic and cyclists by making it easier and more pleasant to move from one end of the city to the other.

Likewise, Copenhagen is hoping to clear up its traffic problems with a complicated network of elevated bike paths, otherwise known as a cycling highway.

While these are ambitious and even delightful-sounding projects, they are also massively expensive; Copenhagen’s plan will cost the city $1 million for every mile of bike path. The European cities making headlines for moving toward a car-free environment are also typically not dealing with the kinds of smog and congestion that has raised alarm bells elsewhere.

Cities like Mexico City and Beijing need to reduce population and improve air quality the most, but they’re the least likely to be able to undertake such massive redesigns as Europe’s metropolitan areas. Car-free cities are the Whole Foods of urban planning—an expensive solution to a problem the rich don’t even have.

Car-free cities are the Whole Foods of urban planning—an expensive solution to a problem the rich don’t even have.

Instead of leading us into the future, the push for car-free cities seems likely to worsen the very problems advocates hope it can solve. While improved public transit and open spaces are inherently good for the environment and the quality of life of a major city, they are expensive solutions that can only be undertaken by cities that aren’t struggling with these problems as much as the poorer cities that can’t afford it.

While the conversation has just begun in the United States, it’s likely we’ll see a similar divide to the rest of the world. The cities with the best public transit—such as New York City or Honolulu—are also among the most expensive in which to live. NYC has the highest-rated public transit in the country and the lowest rate of car ownership. This is no mistake.

By 2050, 70 percent of Americans will live in a city and—without a reasonable alternative—it’s likely they’ll be taking the highway to get there.

Photo via bevgoodwin/Flickr (CC BY 2.0)