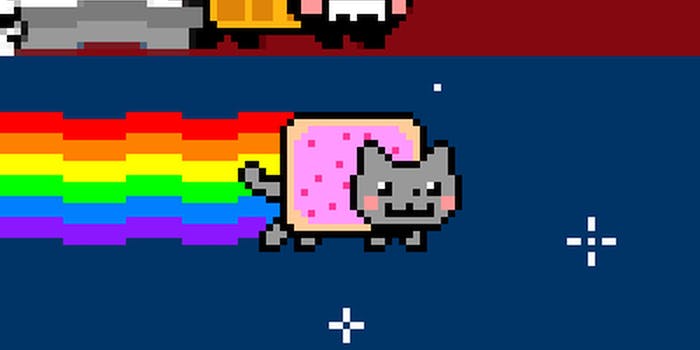 Photocopier retells the story behind his awesome Nyan Cat remix

Joe Palfreyman, better known as Canvas power user photocopier, tells us about his ingenius take on the popular meme.

The story of the Nyan Cat GIF is a simple one.

Just over one year ago, artist Chris Torres created a rough sketch of the colorful feline after a few people at a Red Cross charity drawing on Livestream suggested that he draw a cat and a Pop Tart.

“Well, first of all, the actual cat itself is based off my own Russian Blue, named Marty (from Back to the Future),” Torres told Reddit four months ago. “That night I pixelated it because I wanted it as an avatar. Posted it online without a second thought. A few days later I got word it was on YouTube and it exploded from there!”

Since then, the pixelated cat with the Pop Tart body has become one of the world’s most famous memes. It’s also been the source of inspiration for imaginative fan-fiction about the cat’s origins. Yet, none of the stories have been as poignant and simply told as one by Joe Palfreyman, a Canvas power user known as photocopier.

Only instead of words, Palfreyman used a GIF animation to tell his story.

“I love the nyan cat; it is simple but immediately recognizable,” Palfreyman told the Daily Dot. “I don’t think you can get weirder than a Pop Tart cat travelling the stars propelled by a rainbow. And that tune is just so catchy.”

Palfreyman created his GIF after noticing an animation of a Pop-Tart-less Nyan Cat floating through the air holding a balloon. The GIF took three hours to re-work and re-imagine, he said.

“I was originally going to change the animation to just the cat holding the balloon because I felt it looked better than hanging with the balloon tied around its waist. But after finishing this I realized that an endless loop of it moving through clouds was a little dull—it had to reach its destination eventually. So I had the idea that when it got to space the balloon would pop and cause the cat to fall. It just makes sense that it would be caught by some mysterious floating Pop Tart and become the Nyan Cat we all know and love.

After that it was just a matter of making the animation loop, I’m always disappointed by GIFs that I can’t watch repeat themselves so I have to make them loop so that at least I can enjoy them. The Tac Nyan Cat hitting the Nyan Cat out of the sky was the solution to this problem and I think it worked perfectly. As I have said before in a post, if Canvas has taught me anything, it’s that everything can be made better. This was one of those things. I find a cat floating on a balloon forever cute but boring. I find said cat flying through space being knocked out the sky and then just floating back up again far more exciting.”

And Palfreyman was right. After posting the GIF on Canvas Tuesday, the animation collected more than 1,500 stickers, which allowed it to sit on the sites front page almost all day.

“This, dear sir, is the greatest post of all time,” commented an anonymous Canvas user.

On Canvas, registered users have the unique option of posting comments and content anonymously. Each one of these posts can be “claimed,” which essentially replaces the anonymous author tag with the user’s profile name. There is no time limit for when an anonymous post can be claimed.

Palfreyman originally posted his animation anonymously, but he was quickly identified by another anonymous Canvas user who discovered his signature hidden in the final frame of his animation. The reason behind posting anonymously was a complicated one, explained the 18-year-old British student.

“I like the idea that anyone can create something and not claim credit. The feeling that a picture or anything was just a creation of ‘the internet’ has always had a poetic notion in my mind. But I’m also a hypocrite. Recognition can be great. Reading somebody complimenting me (my general contribution, not just one picture at a time) can really make me feel good about myself. The way I usually post everything anonymously and then I claim things that I particularly like or things that would look good in my gallery at the end of the week or the end of the month. There are some occasions where posting with my name has a specific purpose and I feel the need to identify myself, and also I will sometimes just feel like claiming for no reason at all. It’s not a straightforward matter, and usually it’s a snap decision.

“In the case of this image I posted anonymously out of routine, I still haven’t decided whether I will claim it or not and when I do decide I don’t think I could really tell you why. Interestingly though, this is the first time I have actually included a ‘signature’ of sorts in the image. I was just experimenting with the notion and if this GIF is posted on other sites it would be good if that causes at least one person to find out it was made for canv.as. So I may have posted anonymously, but to somebody who looks hard enough it wasn’t anonymous at all.”

Anonymous or not, Palfreyman put a unique stamp on the Nyan Cat phenomenon that will—quite literally and by design—live on forever.