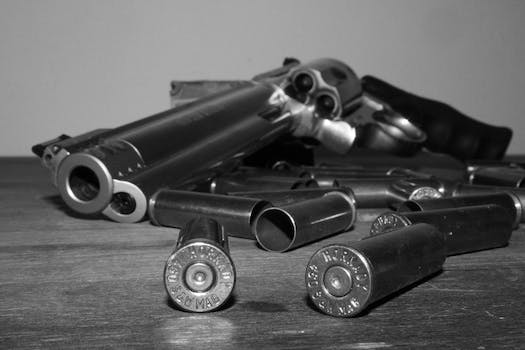 The attack on Canada's Parliament may have us pondering gun violence, but we're approaching it from the wrong angle.

Canada was rocked by gun violence earlier this week as Corporal Nathan Cirillo was gunned down in front of Canada’s National War Memorial in Ottawa and, moments later, shots rang out in the hallowed halls of Parliament, forcing MPs to barricade themselves in with desks and chairs while they waited for help.

The international community was quick to respond with support and condolences, but for many in the U.S., the news felt painfully, oddly familiar; from Sandy Hook to Aurora, Gabby Giffords to the Boston Marathon, violence has become an everpresent aspect of life in America. It is, in fact, so ubiquitous that a mass killing (an event with four or more victims, according to FBI criteria) occurs once every two weeks in the United States.

The amount of violence in the U.S. might seem to be on the rise, and violence might seem to be a uniquely American problem, but the situation is a little more complicated than that. Examining nations similar to the U.S.—with comparable social, cultural, and political environments—reveals that while the U.S. has a much higher rate of violence than other nations, it’s not alone. Furthermore, other nations have mass shootings and other mass murder events—and, across the industrialized world, rates of gun violence are dropping. The claim that we are living in a more violent world, or that the U.S. is influencing global crime rates, is not very accurate.

Within the U.S., most mass killings—slightly over half—involve breakups, estrangements, and other forms of domestic violence directed at family members, a reminder that an estimated 1,500 women are killed in violent relationships annually. Only one in six occurs on the dramatic scale of events like Newton, and it is typically these events that are reported in the national media due to their horrific scale, while shootings related to domestic violence rarely, if ever, make mainstream media. Most Americans, if asked, would affirm the commonly accepted knowledge that the number of mass shootings per year is increasing, but they might be surprised to learn that this is not actually the case.

In fact, statistically speaking, the number of mass shooting events in the U.S., including school shootings, is holding quite steady, though the number of victims is making a slow but definite upward climb.

Why, then, is there such a powerful feeling that things are getting worse? Media coverage plays a big role. It’s almost hard to believe today, but there was a time in the not too distant past when people in New York might not even hear about a school shooting that happened across the country.

Today, every incident immediately explodes onto the national stage and is then amplified a millionfold by social media. It’s a visceral example of the availability heuristic—the easier it is for us to think of a certain type of event (whether a school shooting or a plane crash), the higher we rate its probability. But this is an illusion; just because it’s easier than it ever has been to think of an example of a shooting doesn’t mean these events are more likely than they were in the past.

The Internet has played a huge role in this phenomenon, thanks to the rapidity of Twitter and other social media, which keeps news in the limelight constantly, from the minute it begins to unfold. From the first tweets and photos that hit the web within instants of the event, sent live from the scene by terrified and confused victims, to updates from family members, to news organizations trying to be first to break the story, to police departments desperately trying to control information and calm the public, the Internet feeds a horrified obsession with mass violence events.

In the initial minutes or hours, speculation runs rampant—the shooter is mentally ill, the shooter is Muslim, the shooter has some other beef with the U.S., and people struggle to make sense of the news. The event is followed up with thinkpieces, commentaries, roundtable discussions on the news, and pledges of “never again” that only appear to be broken two weeks later.

Residents of the United States feel like there are more mass shootings than ever before because they are attuned to them. While events like Columbine were shattering and riveting for the U.S., it wasn’t until the advent of widespread, saturated social media that mass shootings began to be reported upon with regularity, with a specific focus on high-casualty, random events.

The Aurora shooting was terrifying because it involved a certain loss of innocence, as people had gone to the movies as a form of escapism, not to be shot down by a ruthless gunman. The Gabby Giffords shooting was a grim echo of the attempt on Reagan’s life and the JFK assassination. Sandy Hook was a terrible reminder of Columbine and the fear that children aren’t even safe in school.

Moreover, reporting on mass shootings has become highly politicised. Conservative media tend to want to play down incidents of gun violence in the U.S., while liberal media want to do just the opposite, as many left-leaning publications support tighter gun control laws and argue that high rates of gun violence are testimony to the need to reduce gun ownership.

Thus, misleading numbers using massaged data are thrown around, making it extremely difficult to pick through for the facts, especially when even the FBI doesn’t keep accurate records. While the FBI is not entirely at fault for this, as it relies on reports from regional law enforcement and FBI offices, the organization freely admits that its recordkeeping is not perfect.

Setting aside questionable data on mass murders, overall gun violence in the U.S. has actually fallen since 1993, according to Bureau of Justice statistics. Homicides involving firearms dropped 39 percent between 1993 and 2011, with non-fatal firearm crimes dropping even more, by 69 percent. While gun violence still accounted for 70 percent of fatal crimes over that period, the overall downward trend was a hopeful sign for the U.S., which has been historically regarded as a country rife with guns. Tellingly, despite these findings, a Pew study found that 56 percent of Americans think the rate of gun violence has increased, illustrating the influence of the media on how people perceive data.

In an effort to explain that finding, the Pew researchers noted that while mass shootings are rare, they capture public interest and are often viewed as touchstone events that help define they year in which the crimes occur. As examples, they cite three shootings in the past two years, in Tucson, Ariz.; Aurora, Colo.; and in Newtown, Conn.

Notably, many journalists didn’t take time to account for statistics in their clarion call for better gun control in the United States in response to the Canadian killings. At the Huffington Post, for example, Paige Lavender took the usual tack in reporting the story, leveraging the incident as yet another call for tighter gun control.

And yet, U.S. lawmakers remain unwilling to take action on gun control. After the 2012 shooting at Sandy Hook Elementary School in Newtown, Connecticut, where 20 children and six educators were killed, the debate over gun control was reignited. But in the years since the shooting, Congress has passed zero gun control laws.

The curious, and tragic, thing about the decision to ignore statistics in favor of sensationalist journalism is that the U.S. does have a gun crime problem and reporting honestly on it would make it impossible to escape. More Americans own guns than in any other industrialized nation, and gun violence is a much bigger issue in the U.S. than anywhere else. Simply reporting the facts would be enough to get the point across; even the real statistics are enough to make a persuasive case for better gun control.

While the U.S. is clearly doing better in terms of gun crime, it’s not there yet, and it could be looking to other nations for inspiration. In Australia, for example, where a mass shooting in the 1990s sparked gun control reform, the initiative turned out to be highly successful, pushing the rate of gun crime in the nation down even further.

In an examination on gun violence among wealthy nations, statistics are quite revealing, even after controlling for population differences. While the rate of gun violence in the U.S. is indeed much, much higher than that of similar nations, Canada actually ranks fourth in a listing of gun-related homicides among 12 industrial nations, with a rate of 0.5 people per 100,000 killed by gun violence. Still a far cry from the U.S.’s 3.5, but not negligible, either.

Canada has fewer gun deaths per year in numbers overall in part because of population differences, not just lower crime rates; the U.S. is nearly ten times as large as its neighbor to the north. Death by gun is not a uniquely American problem in industrialized nations, though it’s often cast as one.

Like the U.S., Canada is experiencing a decline in gun violence. So is Britain, which has been experiencing a slow downward trend, though the bombings on July 7 of 2005 definitely shook London and reminded Britons that they weren’t exempt from violent crime, as did the 2010 Cumbria shootings. In 2011, Norway, which also has an extremely low rate of gun violence, experienced a brutal mass shooting that riveted the world. A German teen opened fire in Stuttgart in 2009. A Finnish shooter killed ten people in 2008.

In the U.S., which stereotypes itself as plagued by an epidemic of gun violence, mass shootings are treated as par for the course with a sense of bitter resignation, but they really aren’t; the American rate of gun violence is higher than other industrialized nations, and higher than it should be, but it is slowly dropping, making these incidents all the more troubling.

While the United States may seem inured to violence, particularly gun violence, the story in nations like Canada and Britain, where gun control laws are extremely strict, is quite different. Canadians weren’t just horrified by the attack on Parliament, but by the much more unusual event of gun violence itself. “The assault in Ottawa shocked a country that rarely experiences gun violence but has witnessed two attacks on members of its armed forces in recent days,” Carol Morello and Mark Berman wrote at the Washington Post, underscoring Canada’s sense of exceptionalism when it comes to gun violence.

While many Canadians remember the Ecole Polytechnique Massacre (also called the Montreal Massacre) of 1989, in which 14 women were gunned down for having the audacity to study engineering, gun crime is much more remote in the Canadian cultural landscape—though this actually isn’t the first time someone has opened fire in a Canadian government building. Jason Hanna at CNN also remarked on the shock among Canadians over the attack.

Canada’s immediate and visceral reaction to the shooting mirrored that of the U.S. in the wake of high-profile mass shootings—nations have a way of rallying together in the face of external dangers. What remains to be seen is what the next step is for Canada; has the nation’s innocence been shattered as it was in 1989, or will it, like the U.S., return to business as usual?

The sense of shock in Canada may be more sustained because the nation is so unaccustomed to gun violence, which could lead to aggressive gun control reforms. If the nation does want to go that route, it might want to look to nations like Japan, where gun control is extremely tightly restricted and the number of gun deaths each year is less than 25; the year 22 people were killed by guns was an event worthy of national horror.

Photo via Greta Ceresini/Flickr (CC BY 2.0)