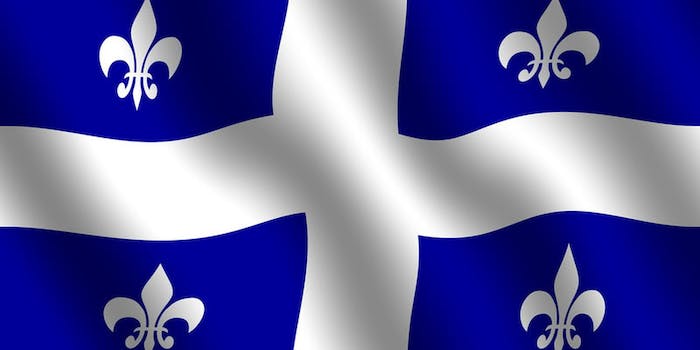 For most small businesses owners, Facebook is an inexpensive and effective way to promote their companies. But for the owner of a boutique clothing store in Quebec, Canada, it’s triggering legal trouble.

Eva Cooper, the owner of Delilah, a women’s clothing shop, has been threatened with a fine if she doesn’t translate her store’s English-language Facebook page to French by March 10, according to the CBC. The threat, prompted by a customer complaint, comes from Quebec’s provincial government, in an attempt to uphold Bill 101. Otherwise known as the Charter of French Language, this 1977 law designates French as the official language of the province.

A spokesman for Quebec’s French-language office, Jean-Pierre Leblanc, told the CBC that the law requires all business promotional materials to be written in French, including posts on Facebook and Twitter.

“It’s not the media itself, it’s the use of it,” Leblanc said. “So when you use it for commercial purpose, advertising, you are selling product or you are advertising for a service, it’s applied.”

But Cooper, who has two stores located near the Quebec-Ontario border with one in either Province, disagrees with this interpretation of the law. Cooper says she deals with customers in both English and French and all other promotional materials for her Quebec store follow the language charter.

“Interestingly enough, it doesn’t really state anything to do with Facebook, but it does talk about catalogues and brochures and flyers,” Cooper said.

She added, “We are dealing with social media and the World Wide Web. It definitely is another area, and it’s a grey zone.”

Cooper has not decided whether or not she will comply with the request. She has asked the language office to send her another copy of the letter, in English, so she can have more background on the issue. The boutique owner says she’s also received a significant outpouring of support from both French- and English-speaking customers. “Likes” for her Facebook page have increased nearly eight-fold since the incident became news.

The shop-owner has also enjoyed support from English language rights groups like the Quebec Community Groups Network. A spokesperson for the group, Sylvia Martine LaForge also argued that the law was unclear regarding social media promotions and made hay out of the fact that the language office’s New York branch maintains an English Facebook page.

This is not the first time enforcement of Bill 101 has been extended onto cyberspace. In 2001, a couple selling maple syrup in Quebec were fined for maintaining an English website to promote themselves.