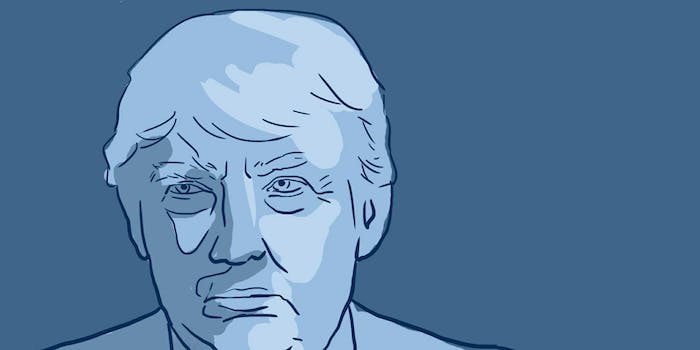 Can Donald Trump go too far?

Donald Trump will say anything to get elected, but will it work?

Even for Donald Trump, the Republican presidential hopeful who’s raised more eyebrows than Botox, it was a stunning thing to say.

The GOP frontrunner’s pronouncement on Monday that he would support a blanket ban on Muslims entering the United States got him another tidal wave of the attention he so craves.

It played directly into the fears and angers of the far-right wing of the party whose nomination he seeks. It made him look like a tough guy, or at least someone attempting to draw the starkest of contrasts to President Barack Obama, who just the night before—in a rare primetime address to the nation from the Oval Office—exhorted Americans not to take out their post-San Bernardino fears on their Muslim neighbors.

Obama said in his speech that Muslims are our sports heroes. What sport is he talking about, and who? Is Obama profiling?

And in classic Trump style, his support for segregating out Muslims seeking entry to America put his GOP rivals yet again in the position of having to react to him—or get lost in the media shuffle.

“Trump is obviously trying to inspire and excite the fiercest anti-immigration elements of the GOP to rally around his banner and smite the infidels,” says Larry Sabato, director of the Center for Politics at the University of Virginia, “and also Ted Cruz, who was shown leading in a Monmouth Iowa poll today.”

Cruz, who has gained currency in the packed GOP field as Republican voters look for a viable alternative to The Donald, distanced himself from Trump’s tirade, saying the frontrunner’s policy was not his own.

Florida Sen. Marco Rubio tweeted that Trump’s “habit of making offensive and outlandish statements will not bring Americans together,” while ex-Florida Gov. Jeb Bush dismissed the former reality-show star as simply “unhinged” in a tweet of his own.

This is reprehensible, prejudiced and divisive. @RealDonaldTrump, you don't get it. This makes us less safe. -H https://t.co/SjAqL0clHd

Condemnation of Trump from the left and center comes as no surprise—and Trump very likely could care less if liberal pundits call him a fascist or a xenophobe.

First off, those critiques are as old as the Trump 2016 campaign itself, which got off to an eye-widening start with his casual accusation that Mexico is sending “rapists,” drug dealers, and various other undesirables across the U.S. border at speed.

Besides, the greatest gift a top-tier Republican can wish for in the current climate is any chance to deflect criticism onto the much-hated “mainstream media.”

If Trump critics point out that the U.S. Constitution bars the kind of religious tests he talked about Monday, don’t expect him to panic. He’s already proposed going around the Constitution to strip U.S.-born children of undocumented immigrants of “birthright” citizenship. He’s also voiced support for the renewed use of waterboarding—widely categorized as torture—in interrogations. And he has suggested “closing up the Internet in some way” to try to stop ISIS.

It’s a waste of time to engage in hand-wringing about whether Trump will say anything to get elected.  His latest rant on Muslims proves it. He undeniably has a base that cheers him on at every (right) turn. Unknown, as of yet is whether his latest ante-up actually brings in new supporters—or drives any existing supporters away.

The question is: Can Donald Trump go too far?

David Brody, chief political correspondent for the Christian Broadcasting Network, weighed in via Twitter, for one:

Expect the @realDonaldTrump statement on USA Muslim ban to give him a boost with evangelicals.

There is no doubt Americans are looking for leadership and reassurance as horrific cases of international and domestic terror become horrifically common. Trump responds to that need in simple and blunt—if incredibly detail-free—terms.

And the latest polls show Trump leading by 13 points in Iowa. Still, many questions remain to be answered:

Donald Trump can quite possibly be defeated—but not, as of yet, underestimated. He can draw a crowd and stir people up on the web—but as the timeworn saying goes, the only poll that really matters is the one in which people actually vote.

That day is fast approaching—and not only Americans, but the world, will be watching. And only then will we really know if it is possible for even Donald Trump to go too far.

Celeste Katz is a veteran journalist with more than 20 years experience in the industry. Her coverage of the 2016 presidential election has most recently appeared in the Boston Globe. Previously, she was a political correspondent, blogger, and columnist for the New York Daily News. A graduate of Brown University, Katz is now covering her fourth presidential election. She began her career as a staff writer and columnist for the Providence Journal and lives in Manhattan.