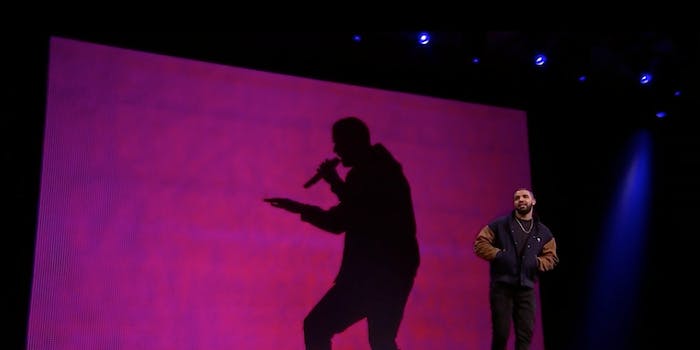 Can Apple save Internet radio?

Why the era of Beats 1 could be upon us.

When you consider all of the changes the music industry has undergone since the turn of millennium, it’s amazing that traditional radio stations exist at all. The sheer variety of content available to consumers through the Internet or their smartphones—MP3s, streaming, podcasts—would seem to be more than enough to fell the giant terrestrial radio, yet it persists as both a popular medium of content and a successful business model. In a 2014 “State of the Media” report, Nielsen found AM/FM radio is still listened to by 242 million Americans, or 91 percent of all Americans. Even 90 percent of the ever-connected millennial generation still listens to radio on a weekly basis. Considering the massive shifts within music since the rise of Napster and iTunes, radio is an astonishingly resilient format.

For a decade, online music has been all about getting the listener what they want when they want it, as well as helping them find new things they didn’t even know they wanted.

Why radio is so consistently a strong part of America’s listening habits is a tricky question, but it’s one Apple hopes to answer. This week at their annual World Wide Developer’s Conference, the smartphone giant unveiled Apple Music, a direct competitor to popular music streaming app Spotify. Although Music will offer on-demand song selection and music recommendations much like its competition, it will also offer Beats 1, a 24/7 live broadcast of music hosted by three professional DJs. The service is decidedly old school, relying on artist interviews, new music exclusives, and constant availability to win over listeners—much like terrestrial radio has for generations.

This might seem like a step backward. For a decade, online music has been all about getting the listener what they want when they want it, as well as helping them find new things they didn’t even know they wanted. This isn’t just in audio—the transition away from broadcast to video streaming services like Netflix and iTunes would seem to indicate most consumers want complete control over what they experience. But Beats 1 is the exact opposite. It’s a single outlet for music curated by DJs for a mass audience. Although Apple Music will also come with the play-everything utility inherent in Spotify and YouTube (far and away the most popular way teenagers listen to music), Beats 1 seems like a throwback to an era most Americans would rather forget—except it might actually end up saving it.

Traditional radio offers a few things apps like Spotify or Pandora can never offer: Identity and a communal experience. Most of us are likely familiar with that sense of pleasure and joy that comes when a radio station plays your favorite song, as if we get a particular satisfaction when everyone else is forced to hear the music we want. Or perhaps it’s just a moment of serendipity—you know the DJ has no idea that you really desperately needed to hear the new Jamie xx driving home from work, so it remains just a wonderful coincidence that this faceless radio station employee has gifted you with a wonderful feeling and energy. And if you listen to that particular DJ driving home every day, you might even start to respect their work as someone who plays music. You might even take their music recommendations more seriously than whatever Pandora’s locked-in algorithm has told you to listen to.

That magic, which any regular radio listener is familiar with, is exactly what Apple is hoping to capture with Beats 1. But it’s more than sentimentality Apple is after with its online radio station. More than just something each individual user can enjoy, Beats 1 stands a chance to be must-hear content in a way perhaps most comparable to MTV in the 1980s and 1990s. Apple’s focus on hiring famed on-air talent for the project speaks to this desire: Zane Lowe, easily the most famous of the three DJs, has become well known outside his BBC audience through his impassioned on-air personality and his infamous interviews with Kanye West. On the other end of the spectrum from Lowe is fellow Brit Julie Adenuga, a somewhat obscure pirate radio DJ, and Ebro Darden, the famed NYC DJ who walked Hot 97 through sex scandals and Hurricane Sandy.

That’s a storied and diverse crew, but one certainly capable of providing Beats 1 with the kind of impulsive energy it will need if it’s going to sustain status as a cultural necessity. What Beats 1 could be is not yet another option for discovering new music, but an organic attempt at recreating either the raw energy DJs were once associated with (during the rise of FM radio) or the revolutionary spirit of early MTV.  If mishandled—run by Apple’s audience metrics more than a sense of originality and creative rebellion—Beats 1 could end up yet another pre-programmed destination for over-played Top 40 shill (like much of pop radio today). But, if done right, it could be both a vanguard and a cultural behemoth.

Beats 1 will be far from the first live broadcast Internet radio station. Early adopters of iTunes at the start of the aughts might remember the bevy of online radio stations iTunes provided, ranging from talk radio and comedy to Top 40 and country. Independent internet radio stations, such as the famed East Village Radio, have been attempting to save the format for more than a decade. It’s now commonplace for traditional radio stations to offer a livestream of their broadcast and iHeartRadio has found success offering users the chance to stream from millions of radio stations across the country. For its part, Sirius XM—largely still a broadcast format—has likewise brought its service online.

But Beats 1, under the massive user base of Apple products (though an Android app is coming soon) and the stylish Beats By Dre, could transform the project into must-listen territory. Much of the Internet is moving toward the initiative of witnessing (or hearing) events as they happen. Livestreaming apps like Meerkat and Periscope are attempting to recapture the experience of live television for a market raised on Snapchat, itself an app that has given a new birth to the old initiative of staying tuned for the latest trend or happening. If Apple allows Beats 1 to rest on the hype of new music, fresh personalities, and that still-present phenomenon of communal experience that radio thrives on today, it could revive the idea that everyone can and should turn on one outlet to find what’s interesting in a music business that has been fractured for decades.