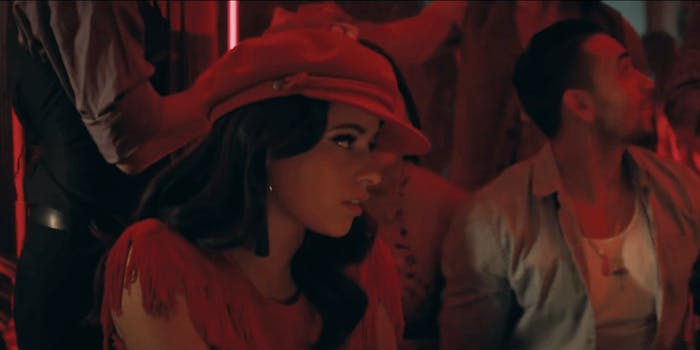 It's already become a meme.

Camila Cabello is getting dragged to hell and back for her acoustic performance of “My Oh My” with boyfriend Shawn Mendes. Cabello and Mendes performed acoustically as part of the iHeart Living Room Concert for America, and viewers were not here for it.

A clip of Cabello adlibbing off-key is circulating on social media, and viewers can’t help themselves from laughing at her performance. It’s become a meme.

Cabello was even dubbed “the worst singer,” end quote.

Viewers made countless memes, and said they were “ugly laughing.”

Cabello and Mendes are already regularly roasted for their bizarre relationship moments, and some viewers took the opportunity to make jokes about them as a couple.

But fans defended Cabello and posted more flattering videos of the singer.

And some fans just loved the original video as is. Many agreed that aside from the clip circulating, Cabello performed well.

Cabello has been taking plenty of heat this year after old Tumblr posts of hers using racist language resurfaced, and many considered Cabello effectively canceled.

While many are stuck at home amidst the coronavirus outbreak, iHeart Media put together the Living Room Concert for America to raise money for coronavirus relief efforts. The show, which aired on Fox, attracted 8.7 million views and raised nearly $8 million, according to Fox News.

Along with Cabello and Mendes, the Living Room Concert also boasted performances from artists like Mariah Carey, Alicia Keys, Billie Eilish, Sam Smith, and Tim McGraw, to name a few.