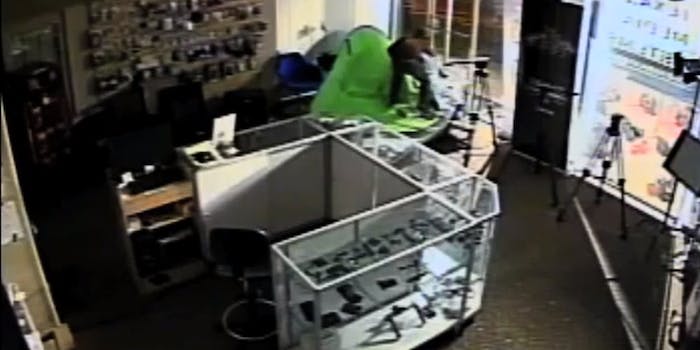 Camera store gets last laugh after an inept burglar breaks in

Perhaps this burglar should find a different line of work.

Break-ins are a huge bummer for small retail stores. There’s police reports to file, inventory and paperwork, not to mention clean up and repairs.

But the employees of an Austin, Texas, camera shop burglarized last Saturday seem to have a sense of humor about their bad luck. They posted a hilarious video to YouTube mocking the inept thief who trashed their store.

“Our store got broken into,” Texas Media Systems employees said in the video description on YouTube. “Judging from the surveillance video the thief doesn’t seem to be highly skilled in this area.”

While the burglar crashes through the store like a drunken buffalo, he manages to swipe under $1,400 in audio/video equipment—and if you know anything about how expensive that stuff is, that’s not much at all.