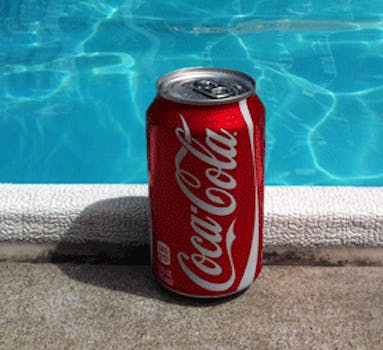 Is this the beginning of the end for the GIF?

When it comes to advertising, international brands like Calvin Klein and Coca-Cola know how to speak a lot of different languages.

One they have just mastered is that of the GIF, or graphics interchange format, the means by which millions of Tumblr users express themselves and create art on the five-year-old microblog.

Both brands are the latest to roll out sponsored GIF ads on Tumblr in what continues to be a resurgence of the 25-year-old image format. The GIFs have been featured on Radar, a tool that is typically used to push out original and interesting content from around the community—but has recently seen the introduction of paid placements.

Coca-Cola’s GIF, which features a can chilling out by the pool, and Calvin Klein’s, which features a sultry model in her underwear, have collected more than 90,000 notes combined and left some people wondering what this means for the microblog.

“In another way, though, it’s another weird blending of sponsored product placement and community generated content that, while effective as advertising and pretty much the new law of the land, can still leave one with a rather discomfited feeling,” wrote Geekosystem’s Ian Chant. “Pretty soon it will be impossible to tell what cats falling off of shelves are advertisements for delicious snack cakes, and which ones are just cats falling off of shelves.”

It is unclear exactly how much Coca-Cola and Calvin Klein paid for their product placement. But according to Business Insider, the entry-level price is $25,000. Despite each of the Radar ads being denoted with a dollar sign and remaining relatively unobtrusive, the community has not responded kindly to them.

“Dear Calvin Klein, Please tell your half-naked, model woman to stop telling me to push it. I’m just trying to blog here, and frankly, I have no intention of pushing anything with this woman,” blogged pristinely-ungifted.

“Surely I’m not the only one that thinks it might be a little inappropriate for Tumblr to have a gif of Random Lady in Push-up bra (with no context) featured on the Radar? SOMEONE THINK OF THE 13 YEAR OLDS!” added lulacrazygirl.