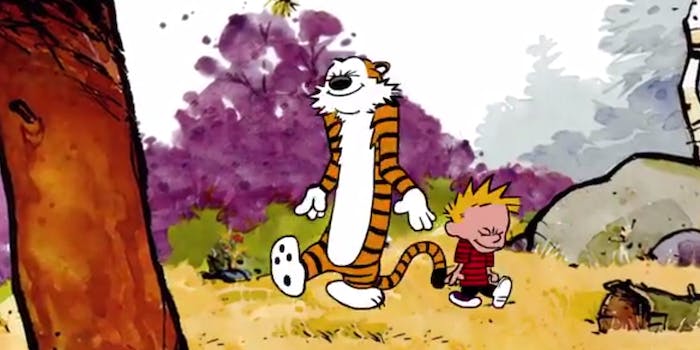 After 27 years, Calvin and Hobbes has finally been brought to life.

After 27 years, Calvin and Hobbes has finally been brought to life.

Animator Adam Brown took Bill Watterson’s iconic characters and has made them dance unlike ever before in a 30-second YouTube clip.

Since Watterson launched his strip in November 1985, he fought against having Calvin and Hobbes animated and commercialized. Over the years, artists like Eric Linn have tried to delicately defy Watterson’s wishes through GIF animations.

“The visual sophistication of Pixar blows me away, but I have zero interest in animating Calvin and Hobbes,” Watterson stated in a rare interview on Oct. 17 with Mental Floss. “If you’ve ever compared a film to a novel it’s based on, you know the novel gets bludgeoned. It’s inevitable, because different media have different strengths and needs, and when you make a movie, the movie’s needs get served. As a comic strip, Calvin and Hobbes works exactly the way I intended it to. There’s no upside for me in adapting it.”

As was the case with Linn’s GIFs, Brown’s video has been well received. Nearly every YouTube commenter has thanked him for making their childhood dream come true.

“This is without a doubt the perfect representation of what I always had hoped someday to see﻿ as a kid, but Watterson never allowed to happen,” Jon Ponikvar stated. “Dude, this is the best 30 seconds of the internet of 2013. Right here.”

Here it is in GIF form: