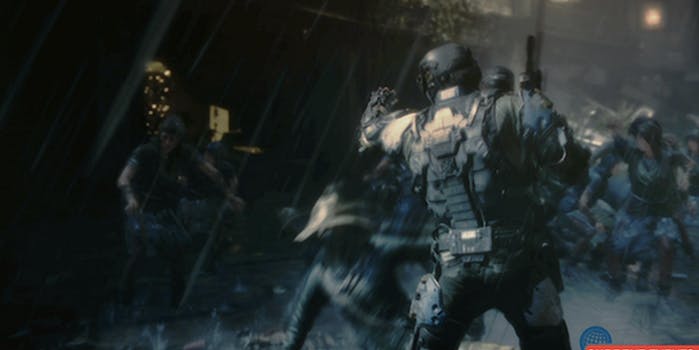 Activision should be ashamed of its ‘Call of Duty’ terrorism hoax

An American company should know better than to use terrorism for publicity.

To promote the upcoming Call of Duty: Black Ops III, Activision reskinned the franchise’s Twitter account into a fake news agency called “Current Events Aggregate.” Its plan was to tease the plot of the new game through these fictitious news stories. Unfortunately, the company neglected to clearly indicate that any of the tweets they posted—including the ones below —were actually fictional.

The stunt was meet with strong criticism across the board, as the Daily Dot’s Dennis Scimeca noted in his original report.

“Call of Duty games have never shied away from sensitive and political subject matter, but when Activision’s official Call of Duty account started ‘live reporting’ a fictional terrorist attack, we saw a marketing move exit the realm of entertainment,” argued Mitch Dyer of IGN. Kyle Sledge of Gamerant agreed:

“Activision should regret creating such a tasteless marketing campaign. Yes, they successfully achieved the goal of getting people to talk about their video game – as we’re doing right now – but the method was rather tactless, as Activision’s manufacturing of a fake terrorist attack could have easily been misconstrued as the real thing, and led to panic.”

That Activision could have Twitter users into believing that a major catastrophe had occurred in Singapore is only half of the problem. It’s the complete lack of sensitivity to acts of terrorism that Activision—an American company—should be ashamed of.

After all, it was only last August that China infamously imposed a social media blackout on citizens’ attempts to discuss a series of mysterious explosions that killed over 100 people in Tianjin. Considering that Activision has been assiduously courting the Asian market since 2012, it’s hard to believe that its social media division would have been unaware of such a recent and prominent news story in that region. If nothing else, It’s definitely guilty of an astonishingly unprofessional oversight.

Singaporeans already have reason to be emotionally vulnerable about the subject of terrorist threats and explosions. Back in May, two Singaporean youths associated with ISIS were arrested for planning violent domestic attacks on Singapore’s soil. Less than a month later, a man was shot dead after plowing his car through concrete barricades outside the Shangri-La Hotel. Although it was later determined that he had been on drugs, the incident still prompted Singaporean security to go on high alert about possible terrorist threats, particularly as the nation hosted the SEA Games (South-East Asian Games).

If this seems like an overreaction, bear in mind that Singapore has experienced several similar tragedies related over the past half century. Its first major encounter with terrorism occurred in 1965, when the Hongkong and Shanghai Bank building (also known as MacDonald House) was bombed by Indonesian Konfrontasi opposed to the formation of Malaysia. Next there was the Laju Incident in 1974, during which a group of Japanese and Palestinian radicals attacked a Shell Oil refinery. Then 1978 brought about the explosion of the oil tanker ST Spyros—not a terrorist attack, to be sure, but a major natural disaster that devastated Singapore at the time (and could have been conjured up by the Activision tweets). In 1991, Pakistani radicals hijacked Singapore Airlines flight SQ117, holding its 114 passengers and 11 crew members hostage until they were killed during a successful rescue operation. Finally, in 2001 —only three months after the Sept. 11 attacks made international headlines—Singaporean intelligence managed to thwart a plot by the Islamic terrorist group Jemaah Islamiyah to bomb various embassies throughout the country.

In short, Singapore has its own long and painful history with terrorism, and as such news hoaxes about possible explosions and martial law in that country are as tasteless as a comparable exploitation of Sept.11 would be here. It’s fair to assume that American audiences would be equally dismayed if the roles were reversed. Whether intentional or not, Activision wound up playing on a series of very real tragedies that have occurred in Singapore to promote its game.

This wasn’t simply an artistic representation or repurposing of those events; it was a marketing gimmick that used realistic-sounding news reports of a hypothetical Singaporean national crisis as a means of drumming up attention for a product.

The moral here is, hopefully, obvious. While there is nothing wrong with trying to find innovative ways of drawing attention to your latest business venture, a line must be drawn when it comes to matters of good taste and social responsibility.

Screengrab via Call of Duty/Twitter