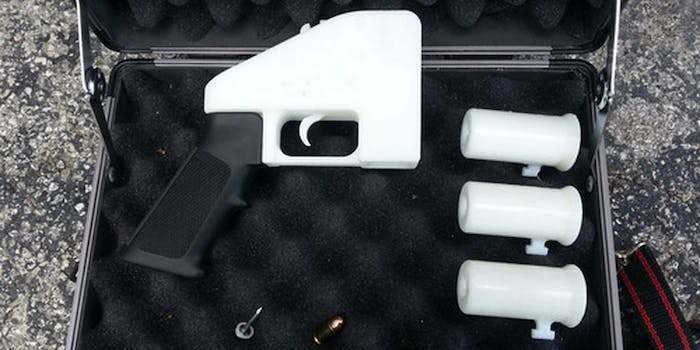 California may become the first state to ban technology used to print guns, if state legislator Leland Lee has his way.

The technology is very much still in its infancy, but it took a major leap over the weekend when Austin-based nonprofit Defense Distributed successfully fired the first gun assembled using almost exclusively printed plastic parts. (The only non-printed component was a common nail.)

Defense Distributed and its founder, 25-year-old University of Texas law student Cody Wilson, have made it their mission to change the conversation on gun control in the United States—or, rather, to make the very concept of gun control impractical.

Lawmakers are responding almost as fast as the technology advances. New York’s Charles Schumer and Steve Israel are pushing for federal bans on the weapons. “A terrorist, someone who’s mentally ill, a spousal abuser, a felon can essentially open a gun factory in their garage,” Schumer said in a press conference. (That’s only partially true: As The Atlantic’s Wire’s Philip Bump discovered, printing out Defense Distributed’s handgun is not nearly as easy as it sounds, though the technology is bound to advance rapidly.)

In the United States, it’s entirely legal to create a gun for your own use at home. Selling the weapon requires a license, something Defense Distributed acquired in March. The nonprofit is less interested in selling its weapons, however, than in distributing itsdesigns for free. It’s all part of that higher purpose: to make gun control a fantasy.

Perhaps anticipating a fierce debate at the national level, Yee, who represents the western half of San Francisco in the state legislature, wants California to become the first state to ban the weapons. “We must be proactive in seeking solutions to this new threat rather than wait for the inevitable tragedies this will make possible,” he said in a press release.