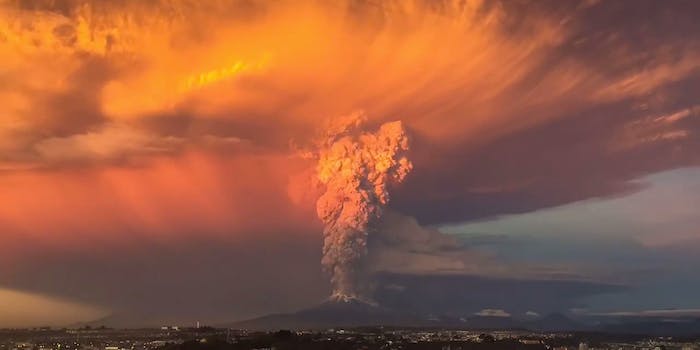 Outside the evacuated area, Chileans are capturing this remarkable sight.

A volcano in Chile erupted for the first time in 42 years Wednesday, causing a huge ash cloud to disperse and forcing the evacuation of 1,500 people in a nearby town.

The Calbuco volcano, located in southern Chile, is considered one of the most potentially dangerous volcanoes in the country, but at the time of its eruption it wasn’t under any special kind of observation, according to regional emergency director Alejandro Verges. Before Wednesday, it hadn’t erupted since 1972.

After the volcano erupted, Chile’s National Mining and Geology Service called for the evacuation of 1,500 citizens in nearby Ensenada. Water is being sent to the region in case existing resources become contaminated by volcanic ash.

Authorities monitoring the eruption spotted ash nearby, but they did not see hot rocks or lava from the volcano on Wednesday, and no injuries had been reported.

By nightfall on Wednesday, photographs showed lava and lightning coming from Calbuco.

Calbuco and Villarrica volcans actived on south of Chile.

Although people in the volcano’s immediate path were evacuated, others reported seeing the eruption as far as 30 miles away. Because they were not in imminent danger, they documented the eruption, leading to the breathtaking photos seen here.

Many of those photographing Calbuco hadn’t seen it erupt in their lifetimes, and it’s possible that it might not erupt again for decades.

The pictures are jaw-dropping and terrifying.