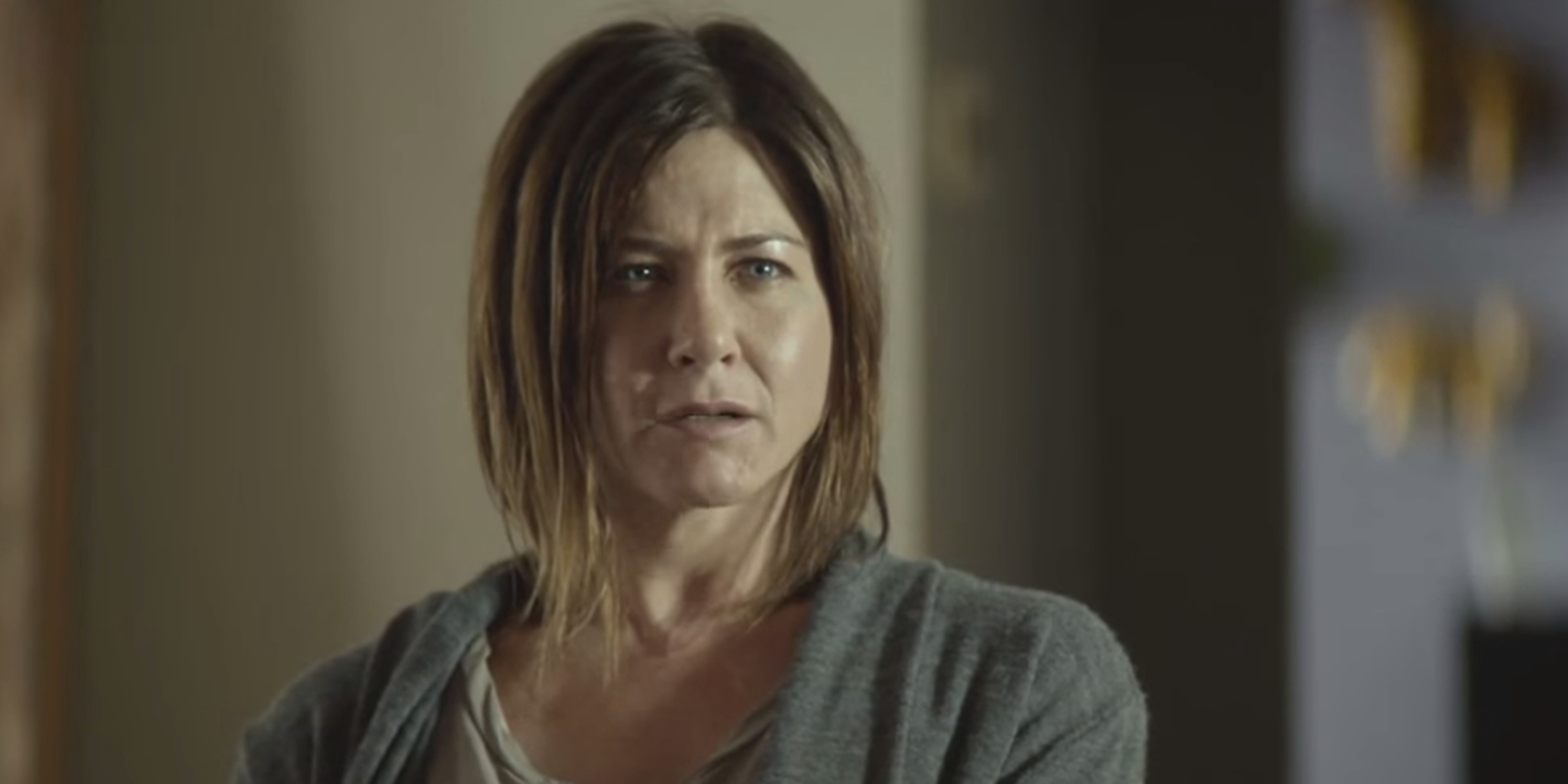 Everyone's raving about Jennifer Aniston's physical "transformation" in Cake, but let's not give her a cookie just yet.

Last week, the trailer for Jennifer Aniston’s upcoming film Cake was released online. The movie, which is already generating significant Oscar buzz, is about a woman (Aniston) who suffers from chronic pain and becomes obsessed with the suicide of her friend and fellow support group member (Anna Kendrick, as a chirpy, impossibly high-cheekboned ghost).

In all honesty, however, the trailer for Cake is far less interesting than the response to it online, where bloggers and commenters are applauding Aniston for her “shocking” “transformation” into her role—which, if the trailer is any indication, basically involved her wearing the wrong shade of foundation and not washing her hair for a few days. Some critics, like Vulture’s Jada Yuan, have compared Aniston’s turn in Cake to Charlize Theron’s Oscar-winning transformation into killer Aileen Wuornos in Monster:

Aniston isn’t just sans makeup in this movie; she’s caked in a foundation that makes her face look greasy and jaundiced. White, puffy scars run across her chin and her cheek and her forehead, hinting at a trauma that will slowly reveal itself. Her hair is unwashed, her clothes the baggy khaki-linen variety of a woman who’s just given up.

Sounds pretty gross, right? But if you actually watch the trailer for Cake, Aniston doesn’t look nearly as repulsive as the puffy-faced, greasy-skinned, baggy linen-wearing she-beast Yuan makes her out to be. In fact, she looks pretty much like a normal person, albeit an extremely genetically blessed normal person. As one Jezebel commenter put it, “Even in ‘ugly’ mode, [Aniston] is in the top 1 percent of regular-ass people as far as looks. This is at most 10 percent Theron.”

Going “Theron,” of course, is now shorthand for what has become a particularly irritating trend in Hollywood: Normally attractive actors like Aniston intentionally fugging themselves up for a role, usually as a way to attract the attention of awards show voters—or to be considered for more serious dramatic roles.

Most of the time, going Theron (or even going 10 percent Theron) works in the actor’s favor. As we all know, Charlize Theron, who gained 30 pounds and donned prosthetics for her role as serial killer Aileen Wuornos, won an Oscar for Monster—as did Nicole Kidman for her portrayal of Virginia Woolf in The Hours, and a significantly less glam Halle Berry for her role as a prison guard in Monster’s Ball.

Sometimes, going Theron backfires, as Jessica Biel learned playing an amputated Iraq War veteran in Home of the Brave or as Aniston herself discovered when she played a frumpy dime store clerk in The Good Girl, receiving much Oscar buzz but no actual nominations for her role.

But for the most part, going Theron is a surefire way to reinvent your career and garner critical acclaim, with people inevitably praising you for being “brave” enough to disregard Hollywood standards of beauty in your quest to get at the heart of your character’s emotional truth. But the trouble is, “deglamming” isn’t really “brave,” so much as it’s a cynical ploy for Oscar votes, while simultaneously thumbing your nose at the real women who look exactly like your “ugly” character on a day-to-day basis—and aren’t paid $20 million per film for doing so.

It’s time to stop commending actors for slapping on prosthetic noses and tinted foundation and extra pounds for their roles, and to start focusing on what really matters: the performances themselves.

That’s not to say that “going Theron” is never warranted. For proof of this, look no further than Charlize’s performance in Monster, where it was clear that the actor truly had to physically transform to capture the twisted yet tender heart of her character. Had Theron played Aileen Wuornos as the five-foot-ten, Sean Penn-dating, glamazon Dior spokesmodel that she was, her portrayal of Wuornos would’ve been about as convincing as Denise Richards’ turn as a nuclear physicist in a Bond movie.

The trouble is that when actors are praised to the heavens for their “bravery” and their “courage” in looking like, well, actual humans, it’s pretty damn condescending to the actual humans who are paying good money to watch them on screen. I remember seeing Monster after reading a review in the Times, which made much of how grotesque and repulsive Theron looked onscreen. During one scene where Theron strips down to her bra to wash herself at a gas station, I remember thinking, “Wow, her body actually doesn’t look so different than mine.” Instantly, my mind flashed back to Stephen Holden referring to Theron as a “ruddy, bedraggled street person,” and I spent the rest of the movie avoiding eating my buttered popcorn.

There’s also something about “going Theron” that smacks of sexism, particularly when you consider the language with which film reviewers describe how male actors undergo physical transformations for roles. When Matthew McConaughey lost more than 30 pounds to play an AIDS patient in Dallas Buyer’s Club, he was rewarded with an Oscar; when Renee Zellweger gained 20 to 30 pounds to play Bridget Jones—which, for the record, put her well within the normal range for a woman of her height—she was rewarded with fat-shaming headlines and paparazzi asking if they could take pictures of her backside. The scrutiny of her physical transformation was so intense that she refused to gain any weight for the third film.

The media’s obsession with Zellweger’s weight in Bridget Jones, a role that won her both critical acclaim and enormous commercial success, reflected an uncomfortable truth about female actors: We are simultaneously fascinated with and repulsed by their bodies, leading us to alternately reward and punish them.

That says a lot about how we feel about women’s bodies in general, but it says even more about how it feels to be a woman in Hollywood, to be under enormous pressure to adhere to a very specific set of beauty standards, while simultaneously being told that no one will ever take you seriously because of how fuckable you are. You can be the object of desire, or you can be the object of the respect and admiration of your peers. But until you find a role that allows you to go 100 percent or even 10 percent Charlize, there is no way you can ever be both.

Truth be told, an actor’s job is to transform into his or her character using whatever means necessary. In this sense, going Theron is no different than, say, donning a prosthetic nose to play Cyrano de Bergerac, or wearing a hockey mask to play Mike Myers in a Halloween movie. If the role truly requires it, fugging yourself up can be an asset to the film. But audiences are not stupid; they know when an actor is doing it for the benefit of a role, and when he or she is doing it for the benefit of her own career.