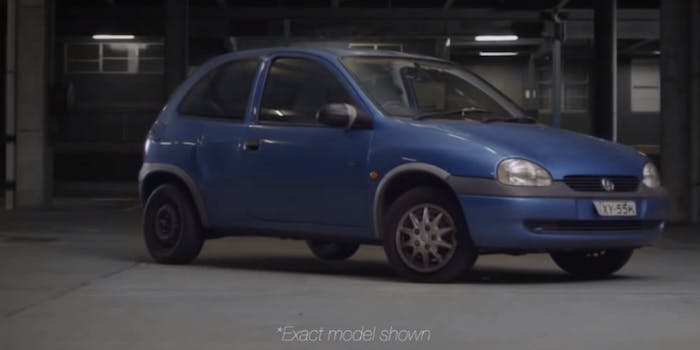 If you're looking for a 15-year-old car in Australia, this one might be for you.

Selling a 15-year-old used car usually results in a lackluster Craigslist posting, but Australian designer David Johns went above and beyond when trying to get rid of his 1999 Holden Barina by crafting a commercial that rivals spots for even the most luxurious of automobiles.

The commerical has all the standard new car ad tropes — dramatic lighting fades on distinct parts of the car overlaid with important info like “careful owner,” shots of the car with flames coming off the spinning wheels, Johns dangling the keys off his finger, and a closing shot of doves dramatically flapping their wings beside the stationary Barina.

Johns also created BuyMyBarina.com as a digital home for the ad, designed like a splashy new car site complete with specs, glossy pictures, and the ability to tweet Johns directly with an offer for the car. Predictably, they’ve ranged from the vaguely serious to the outright comical.

Hi, I will give you a handful of orange Lego, 3 blue pastel post-its and a fish for your awesome Barina. https://t.co/AMZo3OKQ0k #buymybarina

Hi, I will give you $AU 100 for your awesome Barina. https://t.co/0tEEQNnouk #buymybarina

Although there have been high-level offers rolling in, such as one AU $4,000 offer, we know any car that gets this level of love from its owner 15 years on is truly priceless.