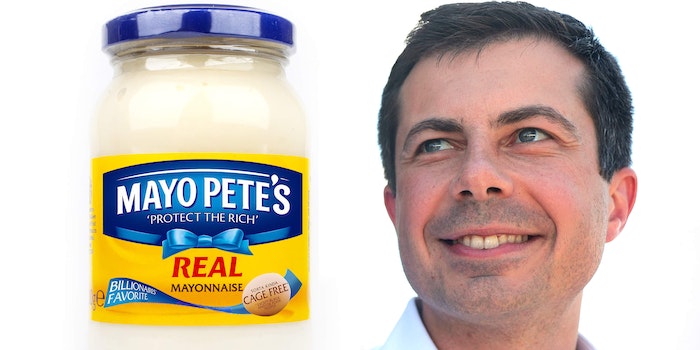 He's not sure he wants to know.

In advance of announcing its endorsement for the Democratic presidential primary, the New York Times editorial board is publishing transcripts of its interviews with the candidates.

Buttigieg claimed ignorance of the memes, which are popular on TikTok. Young TikTok users use it to roast him and his campaign song, “High Hopes” by Panic! At the Disco, and especially the accompanying dance.

The board explained that the memes basically imply that Buttigieg is white and bland, to which he replied, “I get the white part.”

He went on to make a stump-tested soliloquy about healthcare reform, carbon emissions, and college tuition. But all some readers could focus on was that Mayo Pete part.

Online reactions ranged from highly amused to thoughtful or deeply critical of the Times.

“What is Buttigieg’s media diet such that he has never until this moment heard ‘Mayo Pete,'” Parker Higgins wondered.

Brittany L. Shepherd of Yahoo! News offered a more nuanced analysis. She pointed out that the nickname is indicative of problems Buttigieg has with not only young voters, but specifically young voters of color, and noted that while mayo is fun to laugh about, some young voters aren’t laughing at being disregarded by frontrunners like Buttigieg.

“Pete’s campaign has made a vested interest in HBCU youth outreach, dropped ads in Snapchat targeted at black teens, gathered young black surrogates from South Bend to travel with him!” she concluded. “But a worry is if the timing is too little too late. Of course, South Carolina will be a tell.”

In his own words: pic.twitter.com/gAW2OyeGvp

Mayo is delicious, everyone loves mayo. Pete should stand behind mayo and turn it into a strength. https://t.co/5aoAQOO92k

NYT editorial board felt it necessary to explain the meaning of “Mayo Pete.”

Many, many people are saying that bullying works. Never stop posting. pic.twitter.com/l42gab8XbN

How is this the first time I've seen this

Did the NYT call him Mayo Pete?

Remember when Matthew said he looked more like "Mayo Pete" one night like a year ago, I took it, entered it into the lexicon, and told y'all I would make everyone, even the MSM, call him that?

The mayo references didn’t end there.

Later in the interview, Buttigieg shared his coming out story. When he finished, one of the interviews said that it “makes you less mayo.”

After one suggested perhaps the flavor was “basil mayo,” Buttigieg apparently decided to lean really hard into Mayo Pete.

“I actually hate flavored mayo,” he said. “…I only use mayo when I’m making tuna salad. And I want it as straightforward as possible.”

Asked if he was joking, because, as everyone knows, flavored mayonnaise is delicious, Buttigieg doubled down on plain mayonnaise.

The Times’ editorial board announces its endorsement on Jan. 19.