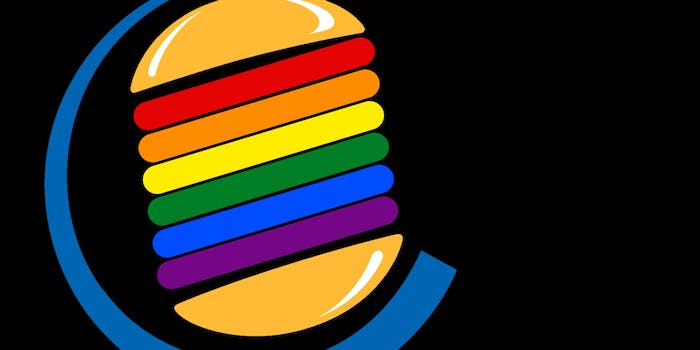 In 2014, appearing to care about equality makes for great clickbait.

What, pray tell, is a Proud Whopper? It’s a whopper with a rainbow-colored wrapper. Outside of that, it’s identical to a normal whopper—and that’s the point Burger King is trying to make. When the wrapper is opened, it states “we are all the same inside.” Just so, an asexual person or a gay person is the same on the inside as a straight person; we’re all blood, guts, and bones with sinews holding it all together.

A Burger King PR rep will tell you it’s a show of Burger King’s solidarity with and love towards the LGBTQIA community. “We felt [the Proud Whopper] could bring to life a message of equality, self-expression, authenticity, and just being who you are,” a Burger King senior vice president of global branding told TIME.

However, to someone who’s not a soulless marketing drone, the Proud Whopper is naught but pandering that doesn’t help progress so much as it helps Burger King. You can just see old ad-men in Burger King HQ saying to himself, “Hmm, being gay is in now? How can we make money off this?”

But Burger King isn’t the first brand to try and cash in on the zeitgeist’s zeal towards social justice, diversity, and tolerance. The whole advertising world is going gay—from Target to Chevrolet. While this seems like a cause waving the rainbow flag in glee over, it’s not. Advertising is a world of heartless cutthroats all with a predilection towards mendacity. Advertisers don’t care about social causes, they care about how they can hijack social causes to further their own ends. Brands are not benevolent. As Salon’s Daniel D’Addario noted:

That’s right—appealing to minority communities is what corporations should do in order to make sure they don’t miss out on those sweet gay dollars. It’s transparently what advertising has always been about, but in an era in which high-profile ad campaigns like the Cheerios spot featuring a multiracial family have been treated as a self-explanatory social good, the discerning gay consumer will hopefully not be too swayed by ads that are meant just to cash in on demographic identity.

An established brand pushing a social justice isn’t activism, it’s marketing—but even prestigious publications like The Wall Street Journal fall for the ploy. They considered Burger King’s ridiculous Proud Whopper as a sign of the company “stepping up” for LGBT rights. They also noted that the video of people unveiling the Proud Whopper has more than 4.3 million views on YouTube.

That’s great, right? Well it’s great if you’re Burger King. Now 4.3 million people (and counting) are going to have a positive image of your brand. Burger King isn’t only a fast food chain—they’re an ally They care.

But where were Burger King and the other LGBT-friendly brands when the potential loss of tenure in San Fransisco threatened to put the jobs of many LGBT teachers in jeopardy? Are they on the front lines of the LGBT struggle in Ukraine? Are they trying to address the fact that LGBT employees feel less satisfied and less empowered at work? What about the very real, very disturbing hiring bias the LGBT community faces? LGBT discrimination is still here, and a shiny wrapper won’t make it go anywhere.

True, it’s just a burger. But that LGBT-friendly burger got media coverage at all the web’s top sites. The day-to-day instances of discrimination people face (whether due to sexual orientation, skin color, or whatever other reason) can rarely boast this claim. Nine times out of 10 we only hear about the former.

“Look how progressive the world is becoming,” we say as we watch a gay couple open a Proud Whopper on YouTube. As we’re transfixed by the feels, countless acts of prejudice are happening right around us, of which we remain blissfully unaware. Transgender people just received federal employment protection last month. It took that long to enact something that should’ve happened ages ago. But who gives a rat’s derriere, society is saved because gay couples are in commercials and there’s a gay-friendly whopper. Truly, we live in enlightened times.

And this isn’t just a problem for LGBT issues. Remember Dove’s “Real Beauty Sketches?” It became the most viral ad of all time thanks to its premise of teaching women to respect themselves—so long as “respecting themselves” meant buying Dove skin car products, natch. The new #LikeAGirl campaign from Always is equally farcical: Be sure to be strong and confident, ladies…but be sure you do that by purchasing Always products.

And, of course, the #LikeAGirl commercial features a conventionally attractive white woman as the star. Do you think #LikeAGirl will help dispel the circumstances that led to #YesAllWomen or stop any other problem women face?

Social justice-conscious advertising mimics the symptoms of progress. It creates illusions of progress that allow us to think society is more progressive than it truly is. When we see commercials touting trendy activist topics, it tricks us into believing the world is moving on from prejudice and doubt. In reality, however, the commercials are a form of prejudice in and of themselves. “Gay’s are safe enough to advertise to,” “Women lack confidence and we can exploit that,” etc.

Advertisers are friends to no one. We would all do well to remember that.