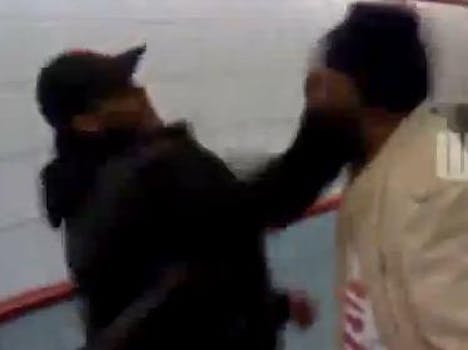 Several years ago, the video series Bumfights spread like cancer online. Now, Internet vigilantes are banding together to help bring a teen to justice for punching a homeless man.

Internet vigilantes have found a new target: a Chicago teenager who assaulted an elderly homeless man back in April.

In a video uploaded onto World Star Hip-Hop on Nov. 5, a young man is seen pestering a homeless man at an underground Chicago train station.

When the homeless man turns around, the teenager knocks him to the ground with a swift punch. His friends burst into laughter as they board the arriving train, some of them re-enacting the assault. As the train pulls away from the station, the camera hovers past a young woman bending over the unresponsive homeless man.

Over the weekend, the video gathered more than 350,000 views after being posted on the social news site Reddit under the title “Disgusting Human.” The controversial clip sparked a heated debate over race. From there, YouTube user mcbride731 uploaded a copy onto the video sharing site, where a similar, less polite discussion took place.  One of the more eloquent comments on YouTube came from fromthentillnow, who wrote of the video:

“It doesn’t matter what nationality or race he is. What he did and the reaction of his peers is what is sickening. But reading the comments below made me realize that half the people commenting are as twisted as the offender here. The comments here have become a medium﻿ for hate mongering and racist babel to be written down and upvoted.”

On Sunday, Fox News Chicago tracked down the parents of the unidentified assailant and attempted to interview them outside their home. As the Fox News segment made clear, the police cannot investigate unless the homeless man steps forward and presses charges.

Unlike the infamous Bumfights videos several years ago, citizens of the Internet, unwilling to wait for the homeless man, have taken it upon themselves to identify the teenager and enact some form of social justice.

A Facebook page titled “Bring ____ to Justice” already has more than 500 Likes, and it was here that a user using an Anonymous-styled photo posted a link to the personal information of the assailant and his family. (The Daily Dot will not be identifying him, as he is a minor.)

Multiple attempts to reach the family by phone were unsuccessful, but as the Fox News interview noted, the parents would only be willing to comment further if the homeless man presses charges.

“It happened in April, I know he was going through some things in April. We’ve tried to fix all of that,” the mother told the Fox News reporter.