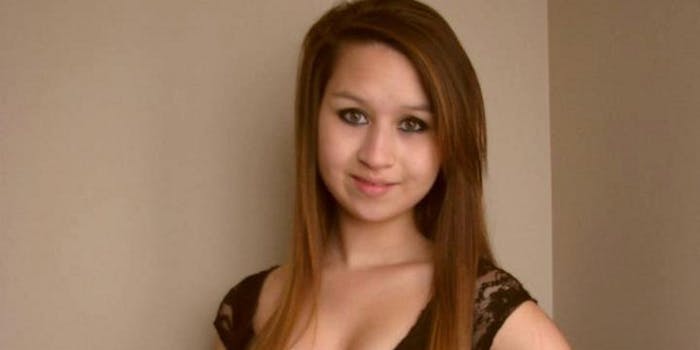 Amanda Todd, a 15-year-old from Metro Vancouver, made a video last month that described her experiences with bullying on cue cards.

A 15-year-old girl from Metro Vancouver reportedly committed suicide last night, just over a month after posting a YouTube video recounting how bullying forced her to switch schools and drove her to drugs, alcohol, and self-harm.

In the video, Amanda Todd describes on cue cards her experiences with both real-world and online bullying. She says she recalls being severely beaten by classmates and having nude photos of her circulated on the web.

“I’m struggling to stay in this world, because everything just touches me so deeply,” Todd says. “I’m not doing this for attention. I’m doing this to be an inspiration and to show that I can be strong.”

Sadly, police in Coquitlam confirmed this morning that Todd committed suicide on Wednesday, though would not elaborate. An investigation into her “sudden death” is ongoing.

Since word of Todd’s death began to circulate, many have taken to social media sites to express their condolences.

On Facebook, a page called “Rest in paradise Amanda Michelle Todd” had over 5,500 likes at the time of writing. The Twitter hashtags #RIPAmanda and #RIPAmandaTodd were both trending in Canada. And YouTuber users were asked to repost Todd’s video in order to raise awareness and keep her memory alive.

YouTuber Mollydoyle18, who had previously posted a similarly titled video, said she was contacted by Todd shortly before her death.

“I was just messaging her about almost a week ago, and I just found out that she has taken her life,” she wrote in the comments section. “She was asking me about how to be an inspiration to others and to get her video more views, and now I have found out that she has passed away… This is a terrible tragedy. I wish she could have had her happy ending.”