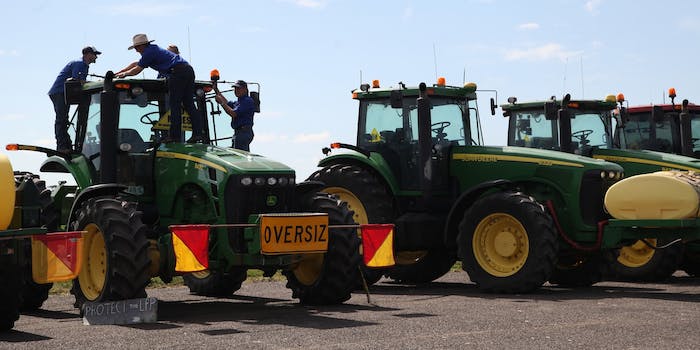 Angry farmers in Brussels broke through a police line with tractors

This frightening scene took place outside the European Union headquarters in Brussels.

Farmers at a protest in Brussels on Monday had no problem breaking a police line thanks to their unique workplace machinery.

Approximately 6,000 protesters gathered outside the Brussels headquarters of the European Union to demand that E.U. agricultural ministers combat the decline in food prices that is threatening their livelihoods.

Angry farmers, fed up with the riot police holding them back, eventually burst through the line with the sheer force of their tractors.

Brussels police eventually retaliated by firing a high-pressure water cannon at the tractors. It’s scary stuff, especially for any bystanders caught in the crossfire without protective gear.

Photo via Kate Ausburn/Flickr (CC BY 2.0)