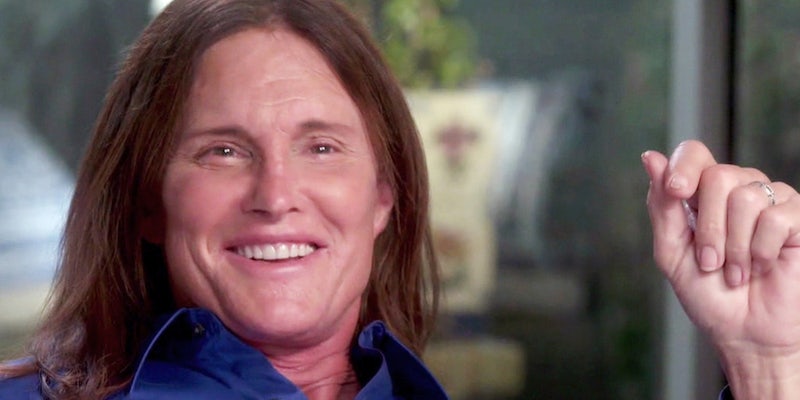 It’s time to rewrite the playbook on transgender athletes

The issue is a whole lot bigger than Bruce Jenner.

As a highly decorated Olympic athlete, Bruce Jenner‘s courageous act of coming out as a transgender woman highlights the dearth of open trans athletes competing at any level, even in a time where there is more acceptance for lesbian, gay, bisexual, and transgender (LGBT) people in both sports and society.

The metaphorical closet for the lesbian, gay and bisexual (LGB) sports community, appears to be slowly, but progressively, collapsing. In the last few years, we’ve seen more athletes—amateur, pro, active and retired—come out as gay, lesbian, or bisexual. The sports community has embraced these athletes. Their stories have sparked allyship awareness among leagues, teams, and players. We have more out LGB players, more pride nights, and more proactive sexual orientation nondiscrimination policies.

However, the sports community has not seen the same types of shifts in trans inclusion in sports. In fact, in many ways, the metaphorical closet for the transgender sports community is as solid as ever. There are still only a handful of openly trans athletes, active or retired. Even less have ever competed at the professional level. To date, no openly trans athlete has ever competed in the Olympics.

Trans visibility might be increasing in everyday society, but this trend is not translating to the sports world in the same way it has for LGB players.

Trans visibility might be increasing in everyday society, but this trend is not translating to the sports world in the same way it has for LGB players.

Sports inclusion advocates have worked to change the culture of sports around sexual orientation, because sports culture around this issue is indeed one of the greatest barriers for LGB inclusion. So far, advocacy has largely focused on LGBT 101 player trainings, educating leagues about the financial benefits of LGB inclusion, and expanding programming for the LGBT fan base.

But the issue of trans exclusion in sports is a whole different ballgame. It’s not just an issue of culture or stigma but one of tangible bad policies—exclusionary policies that have been condoned, ignored, and often celebrated in the sports world.

This exclusionary pattern continues at the collegiate and Olympic levels. While the NCAA does have a policy regarding trans athletes, it requires a trans athlete to either “sit out” or undergo hormone therapy. For example, a transgender player on an NCAA women’s team, undergoing medically necessary hormone treatment, would be disqualified from playing, even if no physical advantages are present.

The burdens on trans athletes are even higher at the Olympic level. The International Olympic Committee’s trans policy requires invasive, painful, and expensive measures. Before a trans athlete can be an Olympian, they must obtain a legal name change, have gender reassignment surgery, and must also have hormone therapy for two years. Once celebrated as a “victory” for trans athletes, this policy, like many of others, has become outdated and inconsistent with new research or medical care standards. It does not, in practice, open the Olympic dream to trans athletes.

Trans athletes are literally excluded from sports at all levels.

Even outside of league restrictions, trans inclusion is even threatened. There has been an influx of anti-trans bills across the country. Many of these anti-trans bills would prohibit young trans athletes from using locker rooms consistent with their gender identity. The locker room is an integral part of the team experience. It’s where team bonding and team strategizing happens. Being banned from the locker room is essentially being banned from the team. Alarmingly, there have been at least 20 of these bills introduced across the country this legislative session. Some of these bills even go so far as to keep transgender children off sports teams altogether. This trend, and its threat to trans sports inclusion, is expected to continue.

Having high profile athletes like Jenner come out as transgender certainly helps draw attention to trans exclusion in sports, but this problem is systemic. So it’s going to take more than courageous trans athletes coming out to improve the situation. For starters, advocates have to let go of the notion that sports, in practice, interacts with gender identity in the same way as it does with sexual orientation. It’s not just an issue of culture or stigma; it’s an issue of real policies that promote these unfortunate outcomes and trans exclusion.

These out-of-date policies have to be combated, dismantled and replaced with policies that respect transgender people.

Ashland Johnson is Athlete Ally’s Director of Policy and Campaigns. In this role, she works with athletic communities to protect and promote LGBT equality across the country. She has written and presented extensively on sports inclusion, and on the intersection of sports, race, and gender.