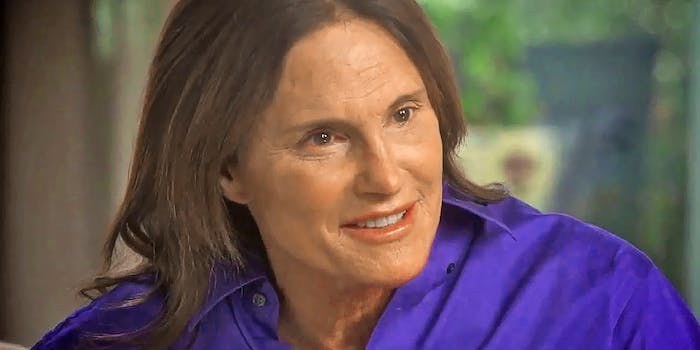 There are more important issues facing the trans community.

So it finally happened. After years of speculation and a media circus that culminated in a two-hour 20/20 interview with Diane Sawyer, the Olympic gold medalist and reality TV star was finally ready to come out, declaring, “For all intents and purposes, I am a woman.”

Now I can hopefully say for the final time: Can we please stop talking about Bruce Jenner? Though Friday marks the first time Jenner has publicly answered questions about his gender identity, speculation on the topic has dominated discussions of trans issues in recent months, drowning out far more life-and-death concerns for our community.

I’m not saying I’m not proud of Jenner for his bravery and candor. I’m not saying that this doesn’t mark an important moment for the trans community. All I’m saying is this: Bruce Jenner is not the beginning and end of the discussion of transgender issues in this country, and maybe it’s time to let him live his life while we move on to talking about other things.

First and foremost, let me say that I have no interest in denying the pain, anguish, and confusion that Jenner has certainly endured. Gender dysphoria is powerful, and it can do serious damage to a person’s personal and emotional well-being, and I’m happy when any trans person finds the strength to live authentically. I applaud Jenner for making that choice, and I very sincerely wish him all the best in his journey.

Speculation has dominated discussions of trans issues in recent months, drowning out far more life-and-death concerns for our community.

That being said, as the media machine gears up for fawn all over Jenner for his bravery and call him a hero, it’s important to keep something in mind: Given his extraordinary economic and social privilege, Jenner’s experiences will not be even remotely representative of the lives of most transgender people or their transition experiences.

For most trans women, the choice to transition has to be weighed against the possibility of losing literally everything: career, home, friends, family, and even our very lives. Jenner is worth millions, probably made a mint off the Sawyer interview, and is parlaying the whole thing into areality TV show about his transition. While there’s some risk of alienating family, the overall degree of personal risk Jenner faced pales in comparison to experiences of the bulk of the trans community.

If we’re going to start holding up trans women as heroes for transitioning, maybe we should start with trans women of color who’ve overcome incredible odds to claim their identities, and who didn’t get a primetime interview (and accompanying check) when they came out.

Given how much Jenner’s experiences will differ from the rest of us, it would also be really awesome if the media didn’t immediately appoint Jenner as the default Official Spokesperson™ for the trans community simply because he’s already famous. The trans community has dozens upon dozens of distinguished, talented writers, speakers, and activists who are actually educated about the complex issues that our community faces and who have experience discussing and educating people about those issues.

It’s those folks who reporters should be calling when they need to discuss stories pertinent to transgender people, not whichever famous person has most recently come out. We don’t grab newly out gay celebrities and expect them to be the political and social face of the gay community, and it’s ridiculous to do it that to trans people.

While I’m sure Jenner’s transition was intensely important for him as an individual, the endless speculation about whether or not Jenner is transgender is absolutely not something that should be making the national news on a daily basis, especially since it’s been largely to the exclusion of all other stories about the transgender community.

Jenner’s experiences will not be even remotely representative of the lives of most transgender people or their transition experiences.

While the world has been obsessing over Jenner’s gender identity, 2015 has been particularly deadly for trans women of color, a fact that’s gone largely unreported in the mainstream media. The fact that Sawyer and the network execs at ABC were willing to devote a block of prime TV to Jenner’s coming out speaks volumes about the prurient fascination the public has with transgender people and the transition narrative in particular.

Imagine if that two-hour block of time on a major network was instead devoted to discussing the systematic patterns of harassment, violence, discrimination, and poverty that are inflicted on trans women of color in the U.S.? What if even 30 minutes of that block was devoted to discussing how incredibly difficult it is for trans people to access even basic healthcare?

CNN is calling 2015 “The Transgender Moment,” but it appears that “moment” is mostly an overblown fascination with the body of one particular rich white person.

Instead of obsessing over Jenner, it would be awesome if we could use some of that energy to discuss some of the myriad issues facing non-famous trans people. Maybe let’s put some focus on the terrifying number of bills proposed this year that would force transgender people to use the bathroom of their birth-assigned sex. Or maybe we could spend some time talking about the fact that it’s still legal to fire someone simply for being transgender in 34 states.

We could also discuss how most trans people still struggle to get their insurance to pay for their medically necessary transition-related health care costs. The terrifying surge in the number of transgender teens taking their own lives might be worth a few minutes of airtime.

We could even talk about positive things, like legal victories for protecting trans rights, Andreja Pejic being featured in Vogue, or transgender prom queens. Honestly, if ABC had played Bailey Jay’s interview with Amy Schumer on repeat for two hours, that might have actually done more for trans community than the Jenner circus.

CNN is calling 2015 “The Transgender Moment,” but it appears that “moment” is mostly an overblown fascination with the body of one particular rich white person.

What’s interesting (and honestly, baffling) about the situation is why the public fascination with Jenner is particularly intense. When director Lana Wachowski came out in 2012 (and was one of the first people in Hollywood to do so), it was with considerably less fanfare and pageantry. When Against Me! singer Laura Jane Grace came out the same year, it certainly made the news, but no one was rushing her to a primetime interview spot.

Maybe it’s an increased awareness of transgender people over the intervening three years, or perhaps it’s simply Jenner’s years of living in the spotlight of reality TV making Jenner’s coming out little more than “very special episode” of Keeping Up With The Kardashians. Regardless, it’s been frustrating and disheartening to see so much of the media coverage about the transgender community being devoted to a person who we didn’t actually know was transgender until last week.

So, the metaphorical cat is out of the bag, and the entire Western world has been informed of Jenner’s gender identity by prime-time television. Now it’s time to pack up and talk about something else.

Mari is a writer, educator, and proud science PhD dropout. Her writing focuses on queer and transgender life, feminism, science, and pop culture nonsense. Her work has also appeared on Autostraddle, Daily Dot, Salon, and TransAdvocate.