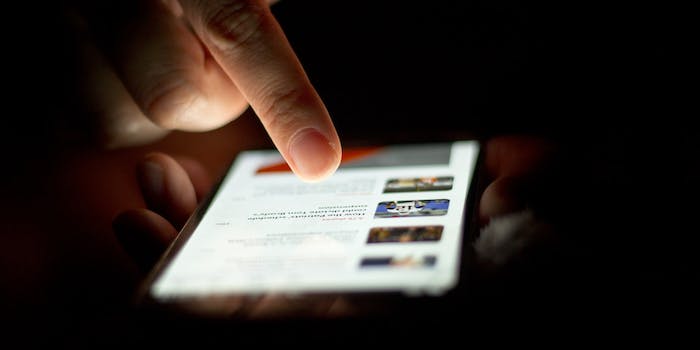 Our need to constantly charge our phones is killing us

Here's why the FOMO economy never wants your phone to die—ever.

First, there was the infamous Hugh Jackman incident, where he yelled at an audience member whose ringtone was a little too persistent. Now the great white way is dealing with the fallout from a performance of Hand to God this past Sunday, in which an audience member climbed on stage before the show to plug their phone into an outlet so they could charge it. The outlet was fake, of course—just a piece of good set design—but one can’t help but wonder what was going through that person’s mind when they decided to give it a try.

The incident reveals an encroaching reality that smartphones have wrought upon us. It’s no longer enough to have our phones handy all the time—we now have to be able to access them at every possible moment. This is how the tech industry wants it and why the mobile economy has increasingly become the gateway to our daily lives.

The first sign that the game has changed is the industry that’s sprung up around phone-charging. Everyone is obsessed with getting the most out of their smartphone’s frequently shoddy battery life, and many smartphone manufacturers bank on the fact that your phone’s ever-diminishing battery will encourage you to buy the new model year after year, in the hopes of squeezing just one more hour of juice out of your device.

It’s no longer enough to have our phones handy all the time—we now have to be able to access them at every possible moment.

However, phones like the LG G Vista, Samsung Galaxy S6 Active, and the Motorola Droid Turbo are designed to make sure you’re never without your trusty phone charged at all possible times. Otherwise, you can rely on portable battery chargers to keep you constantly plugged in. You’ll never have to be off the grid again.

The real way of the future, though, is charging stations, which have become a staple of music festivals. The growing industry—powered by firms like Veloxity—hopes to make charging stations ubiquitous, pushing them to malls, restaurants, casinos, college campuses, and movie theaters; they even debuted at the U.S. Open in 2014. You won’t need to charge your phone before you leave or remember your car charger on the way to where you’re going, because you’ll also be able to charge your phone literally whenever you want.

And if that’s still not enough for you, miniature, biodegradable chargers will help keep your battery alive forever. Constant connection is the name of the game. We asked for it, and now we’re going to get it.

But the doesn’t answer a more important question: What’s so scary about disconnection? The fear of our phones dying has become so ubiquitous that there’s even a name for it: nomophobia. According to a 2012 survey, 66 percent of Britons reported “[feeling] anxious and tense when they are out of reach of their phone,” a figure that rises to 77 percent among those 18-24.

The number one symptom of nomophobia? “An inability to ever turn your phone off,” wrote the Daily Mail’s Eddie Wrenn.

It’s strange to think that just a few short years ago, the idea of having Internet on your phone was a novelty, and a decade before that, having a cell phone at all was a luxury. But today, we need to be fully connected at all times.

Just this week, David Pierce at Wired argued that our constant need to stay engaged poses a particular issue for streaming services like Spotify or Pandora, which “are built on the assumption that we’re always online.”

“For Facebook and Twitter, that’s fine: If the page doesn’t load, refresh it, or give it a minute,” Pierce wrote. “Better yet, don’t even look—let the app send you notifications when there’s something you need to see. Netflix and Hulu can make a similar assumption, because you’re probably watching on a Wi-Fi-connected TV or set-top box. Music is a complicated middle: We want to listen for hours, and do it everywhere.”

Constant connection is the name of the game. We asked for it, and now we’re going to get it.

“Twitter users who visit its site or open its app at least once a month are looking at Twitter seven times a day, on average,” notes Christopher Mims at the Wall Street Journal. “That almost certainly means that a sizable chunk of users are checking Twitter dozens of times a day, to balance out the ones who barely engage with the service.”

There’s a reason that Mims calls it the “Distraction-Industrial Complex”: Push notifications aren’t designed as a substitute for a service but another reminder to check it. Facebook supposedly represents 20 percent of the time the average American spends on their smartphone. And it’s hard to believe the average American wouldn’t be checking Facebook so often if they didn’t get notified whenever someone interacts with them.

Don’t blame the push notifications, though; they merely take advantage of other hangups we have about our relationship to technology. It’s part of a cultural “Fear of Missing Out,” or FOMO, one increasingly fueled by the gadgets constantly at our fingertips. Research shows a direct link between social media and FOMO, as Mashable reported on a 2013 survey finding that “56 percent of people are afraid of missing out on events, news and important status updates if they are away from social networks.”

While this might seem like a passive outgrowth of the digital age, it’s anything but accidental. It’s part of what the Guardian’s Tomas Chamorro-Premuzic calls the “attention economy”: the need for businesses to “[monetize] our ephemeral interests.” By keeping us connected to our phones, companies ensure that consumers keep clicking—and spending.

At the New York Times, Nick Bilton breaks down how every aspect of our day can be monetized a lucrative social experience. Say you want to have a nice evening out at your favorite restaurant. Bilton writes, “People make dinner reservations on OpenTable; check in on Foursquare when they arrive at the restaurant; take a picture of their food to share on Instagram; post on Twitter a joke they hear during the meal; review the restaurant on Yelp; then, finally, coordinate a ride home using Uber.”

An app you look at once in awhile is OK, but an app you need to look at every day, all the time—now that’s how empires are built.

This is what the attention economy—or really, the FOMO economy—is really about. An app you look at once in awhile is OK, but an app you need to look at every day, all the time—now that’s how empires are built. It’s not only connectivity as lifestyle, connectivity is also proving to be the future of American industry, even if it kills us.

Having all the information and tools that we could ever possibly want at our fingertips can certainly make life easier. Maybe that guy who hopped on stage last Sunday even bought tickets to the show with his phone. But the experience of staying connected to our phones should not be more important to us than the experiences our phones make it easier for us to have.

Photo via Japanexperterna.se/Flickr (CC BY SA 2.0)