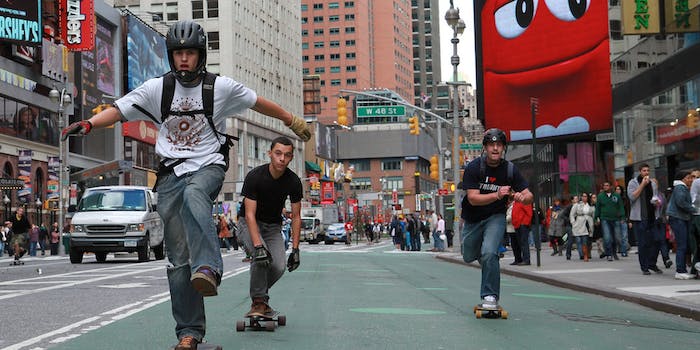 Watch this comedy of errors between NYPD and skateboarders unfold

Welcome to a bird's eye view of Broadway Bomb, the NYPD's annual experiment in herding cats.

The New York Police Department and Broadway Bomb participants clash every year, but it always boils down to who can outmaneuver whom.

The Broadway Bomb is an annual free-for-all skateboarding race from 116th and Broadway to the statue of the Charging Bull in Downtown Manhattan. There are essentially thousands of professional and amateur skaters weaving in and out of traffic as they try to get to the finish line.

The only problem? It’s an illegal race, and despite efforts by the NYPD to shut it down every year, thousands show up anyway.

This year’s race in mid-October had the largest police presence yet with about 1,500 officers along the course. The NYPD has tried putting barriers to slow down riders and hand out summons to the skaters, but with a wide street, a plastic barrier can only do so much.

And once you add in one of the more famous pieces of chase music? All bets are off.