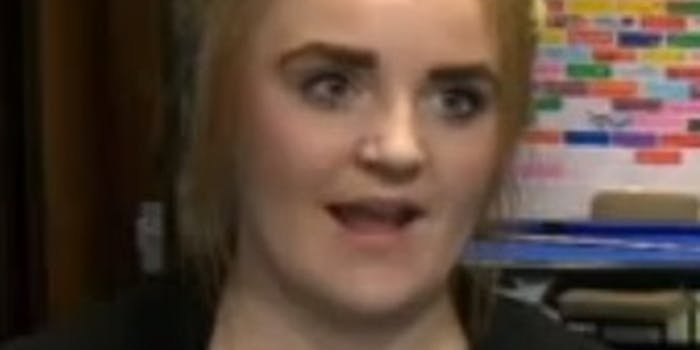 Since last week, 17-year-old Paris Brown has been Britain’s first Youth Police and Crime Commissioner. Everything was going fine, until someone found her Twitter account.

Picture this: you’re 17 years old. You’re a regular tweeter, in tune with current youth culture. One day, the police offer you £15,000 a year to be a youth advisor, and of course you say “yes” because you’re making decent money for a teen.

However, what happens when you’re actually terrible at Twitter? What if your timeline’s full of illicit claims, racist slurs and homophobic insults? Why, the police keep paying you of course.

Since last week, Paris Brown has been Britain’s first Youth Police and Crime Commissioner,  working as a liaison between police and young people in Kent, England. Ann Barnes, police commissioner for Kent, is paying Brown out of her own salary.

All seemed to be going well until a newspaper unearthed Brown’s tweets about her sex life, drinking, and making “hash brownies.” Oh, and she also used terms like “fags,” “illegals” (for immigrants), and “pikeys” (for travelers).

She posted tweets like “im either really fun, friendly and inclusive when im drunk or im an anti social, racist, sexist, embarrassing a****** often its the latter.” Brown talked about hating violence but being pleased when her brother “thumped” someone else.

Barnes told the BBC “these tweets were written when she was 14, 15.” That may be true, but it’s difficult to verify now that Brown has deleted her account.

Before the tweets disappeared from Topsy as well, we noted that on March 1 Brown tweeted “Some bloke has driven down sittingbourne high street 3 tines in his fancy red car, dtiving slow. Yes you have a nice car but ur fat + ugly.”

A few days prior: “Oh my god, yes its sexist, no i dont give a goblins shit, boys are so stupid. No not all you, but a majority of you are twonks. Dont cry”

In all, Brown posted more than 4,000 tweets from her personal account before nuking it in the wake of the revelations. Barnes won’t fire Brown and described the teen’s tweets as youthful boasting and exaggeration, the Guardian reported.

“You cannot condone any offensive tweets and I certainly would not accept anything like that now that Paris has been appointed but I wanted somebody for this job who was a typical teenager,” Barnes told the Mail on Sunday. “There is no way I would think of removing her from her post and I am sure Paris will learn from this mistake and be able to move forward to making a success of the role like I know she will.”

So, it’s OK that Brown did post seemingly racist and sexist tweets dredged up from her mind, as long as she doesn’t share such “offensive things” again. What is it they say about leopards and spots?

Anyway, Brown denied ever taking drugs, claimed she is neither sexist nor racist, and said she occasionally had a glass of wine. Her now-deleted tweets will hang around her neck for years to come, thanks to the press coverage popping up any time someone Googles Brown’s name in the near future.

“I think that if everyone’s future was determined by what they wrote on social networking sites between the ages of 14 and 16 we’d live in a very odd world,” Barnes wrote on her website.

That’s a fair point. It doesn’t make what Brown tweeted any less moronic. Nevertheless, if Brown is the public face of policing for youths in Kent, that county looks like it’s a fun place to be.

UPDATE: Brown resigned on Tuesday, the BBC reported. She said she was “quitting in the interests of the young people of Kent.”