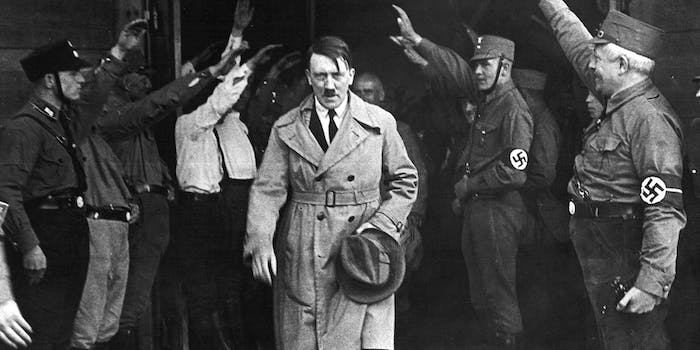 If an online discussion goes on long enough, sooner or later someone will compare someone or something to Hitler.

This infamous connection came to light again last week, when Jezebel’s Erin Gloria Ryan mistakenly jumped on a satirical piece from the website National Report that detailed a fake interview from the newly launched Sarah Palin Channel, where Obama was repeatedly referred to as “N– Hitler.” The fallout from the mixup was swift, and Ryan’s report has since been corrected.

But the story isn’t over, not really. Though the National Report is a parody site, one still has to wonder why Ryan was so quick to believe their words.

Political biases aside, President Barack Obama does continue to get compared to Adolf Hitler on an almost mundanely regular basis. And he’s not the only one. Hitler gets brought up so frequently in the modern political landscape, his name has become somewhat of a multi-faceted buzzword.

Obama isn’t the first U.S. president or world leader to be compared to Hitler, and he won’t be the last. But the persistence of the Obama/Hitler comparison, the way it permeates the bottom rungs of political discussion, is unique.

Long before the partisan discourse in America had become as polarizing as it is now, people on both sides of the aisle loved to namedrop Hitler. All the way back in 2008, Rose-Anne Clermont of The Root decreed, “Comparing politicians to Adolf Hitler is a tired, cheap trick that has been used to demonize George W. Bush, John McCain, and even Barack Obama.”

As Clermont astutely notes, there was a time, pre-Obama administration, when politicians on the right were actually far more likely to be compared to Hitler than those on the left. In 2012, Joe Gandelman, editor-in-chief of The Moderate Voice observed,

Billionaire George Soros said a ‘supremacist ideology’ guided the Bush White House and: When I hear Bush say, ‘You’re either with us or against us,’ it reminds me of the Germans. Moveon.org had an online video contest online that produced a commercial with the Hitler comparison. Some anti-Bush websites and celebrities used the comparison. Google has many images of Bush photoshopped as Hitler. A whole website is devoted to the references.

It is true that Bush was compared to Hitler a lot. In 2004, Duncan Campbell at The Guardian went so far as to make intricate links between Bush’s grandfather and the Third Reich. In fact, if Obama and Bush have one thing in common, it’s that the one way for them to escape such comparisons may be in leaving the Oval Office.

Hitler comparisons extend beyond U.S. policy, too. It was just this March that Rahul Gandhi, of India’s most famous political dynasty, likened his opponent Narendra Modi to Hitler leading up to the country’s general elections (Modi would go on to win and become Prime Minister.)

Comparing someone to Hitler also seems to have become all the easier in the age of Internet trolling, where outrageously offensive opinions have gotten that much more visible, if not more prevalent. As Viju Cherian of the Hindustan Times wisely posited, “Gandhi has made the political equivalent of an Internet truism—Godwin’s Law, which states that ‘if an online discussion (regardless of topic or scope) goes on long enough, sooner or later someone will compare someone or something to Hitler or Nazism.’”

IVN’s Michael Austin, meanwhile, also singled out Mitch McConnell and Nancy Pelosi among the politicians who’ve received the Hitler stamp in recent years. For Austin’s part, the comparisons are inappropriate no matter if they’re directed at the left or the right. “The contraception mandate is not Kristallnacht, sequestration is not the Beer Hall Putsch, and Fox News is not Triumph of the Will,” he writes. “We can have perfectly acrimonious debates about all of these hot-button issues without ever cracking open The Rise and Fall of the Third Reich or Eichmann in Jerusalem.”

Austin is correct in his assertion that such comparisons are ludicrously out of proportion. The idea that Obama wants to take away everyone’s guns, for instance, is slightly laughable, considering that any major gun control supporter will tell you that his record is abysmal when it comes to that issue.

But then again, the ludicrousness of such comparisons is also part of what makes them so popular. In a Huffington Post piece called “Before You Compare Something to Hitler and Nazis… Don’t,” human rights advocate Bernie Farber finds, “As for why people insist on making such comparisons, I’m not sure. Clearly, like Nazi swastikas painted on the walls of a synagogue, they have a certain perverse public relations value. Comparing a person or an issue to one of history’s most demonic regimes and its leader is provocative to be sure, and it will make the news.”

Yet this is where the Obama/Hitler comparison diverges somewhat. Because although there have been several very visible instances of this, it’s also gotten so commonplace that in a sense, to hear Obama compared to Hitler isn’t that shocking anymore.

It’s hard not to argue that the right specifically has had something to do with this. Gandelman even pulls a quote in his aforementioned piece from Jeb Bush, a lifelong Republican, wherein her reluctantly admits, “I used to be a conservative, and I watch these debates and I’m wondering, I don’t think I’ve changed, but it’s a little troubling sometimes when people’s fears and emotion rather than trying to get them to look over the horizon for a broader perspective.”

Perspective, it appears, is something many Americans are severely lacking in, especially if Obama is involved. A Harris Poll from 2010 has many as 20 percent of Americans believing that Obama is, in some way or another, similar to Hitler.

And among those 20 percent, the most vocal group appears to be the one percent. But where the rest of America appears to fear Obama’s Hitler-like qualities out of misinformation or willful ignorance, the super rich have crafted a careful narrative out of that fear to fit their personal interests. For them, the very notion that Obama could pose a threat to their powerful minority, and to the system that is designed to keep them in that place, is legitimately scary, and it serves them if everybody else is scared, too.

Think about it: the 99 percent persecuting a powerless minority. The leader scapegoating that minority and raising their taxes. And a bigger welfare state—because you can’t have national socialism without a proper helping of socialism. Yep, Obama’s America is basically the same as Hitler’s Germany. If only we could all go back to before World War I: before Obamacare, before Nazism, before constitutional income taxes. Ah, 1913. Never forget.

Finally, it needs to be said that comparing Obama to Hitler, more than doing so with any other American President or politician, is grotesque for obvious reasons. Hitler believed in the white race. He believed in their supremacy, above all else. Therefore, on the most fundamental of levels, Obama and Hitler cannot be the same, in any remote kind of way.

The perversity here is that this has managed to stoke the fires of the Obama/Hitler comparison. This late in the game, it is fair to say that by broad standards, Obama has not been a great president. But the sheer level of vitriol he has faced is unparalleled and equating him to the most evil dictator in modern history without reproach is merely another piece of the puzzle. As argued by Joan E. Dowlin at the Huffington Post, this has to be tied to his race.

I know of no other president who has been called a liar during his State of the Union address, been compared to Hitler and the Joker, been hanged in effigy, lampooned as a rodeo clown, been demeaned in a float with an outhouse saying ‘Obama’s library,’ had the greatest number of threats to his life than any modern leader, threatened with an unprecedented lawsuit from the speaker of the House and impeachment from some Republicans while he has broken no laws and accused of using too many executive orders while the truth is he has the second fewest number of any president in the last four decades.

An apple is not like an orange. No matter how much you want them to be the same, yelling, “THIS APPLE IS AN ORANGE!” will not make it so. They have a similar shape, yes. But they are not the same. Two people on the other hand, might both be good at public speaking. But that doesn’t make them the same either. An apple is not an orange. And President Obama is not Adolf Hitler.

For any rational, thinking person then, comparing Obama to Hitler is insanity. And whether you believe that the comparison has anything to do with the color of his skin or not, you should at least have the common sense to think about what you’re saying before you say it. That’s not to signify that Obama has earned your approval, or your basic respect, for that matter. But Obama is not Hitler. Hitler was Hitler. And this many years removed from WWII, it can be easy to forget that he was more than the ghostly, faded image of him we have today. It can be easy to forget that he was a monster.

So if Obama decides to commit genocide, too, if he murders six million people, if he turns into that pure of a monster himself, then by all means, feel free to call him Hitler. Until then, do so with the knowledge that you are negating a modicum of true human decency and fanning the fires of a hatred which should have long since been extinguished.