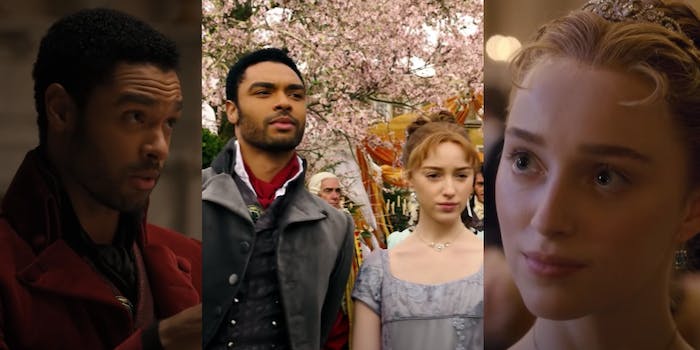 The critics' unsaid notion is that there's no way Black people could behave as they do in the Netflix series.

Shonda Rhimes’ new Netflix period drama Bridgerton has turned heads since its Christmas Day debut, with stirs around race and historical accuracy of the time period.

The first season of show centers around the relationship between a white future duchess Daphne Bridgerton (Phoebe Dynevor) and a Black inheritor of dukedom Simon Basset (Regé-Jean Page).

As with all other Shondaland vehicles, diversity is a fundamental hallmark; but because the show is set in the influential Regency period of the United Kingdom’s history, many (mostly white viewers) are questioning the exactness of the portrayal.

There are reasonable critiques, based in discourse of consent and rape:

However, some of the criticism appears further tied to concepts of agency (or assumed lack thereof) of Black people during the era.

The unsaid notion is that there’s no way Black folk could behave as they do in Bridgerton.

However, reporter Nadra Kareem reminded critics, in a short Twitter thread, that if they simply perused the famed works of Jane Austen, they would see Black representation in clear view.

Kareem tweeted: “People are asking if it’s historically accurate to have black characters in #Bridgerton & I want to point out that Jane Austen herself included a WOC in her unfinished novel Sanditon, also set during the Regency period. Crystal Clarke played her in the TV series.”

Actor and director Daniel York doubled down: “And Elizabethans were about 4’11” tall, had terrible skin, terrible teeth, STD’s, stank and dropped dead when they were 40. ‘Historical accuracy’ basically means ‘racism'”

Julia Quinn, who wrote the book from which the show is adapted, appreciated the inclusion of Queen Charlotte, a woman known to be of German and (perhaps) African heritage. The latter is still being debated.

“[Some] historians do believe she was Britain’s first Black queen, and that her descendants, including Queen Victoria and Queen Elizabeth II, have African ancestry… Charlotte, who was born May 19, 1744, was the youngest daughter of Duke Carl Ludwig Friedrich of Mecklenburg-Strelitz and Princess Elisabeth Albertine of Saxe-Hildburghausen… Historian Mario De Valdes y Cocom argues that Charlotte was directly descended from a Black branch of the Portuguese royal family: Alfonso III and his concubine, Ouruana, a Black Moor.”

Ultimately, the show is fantastic, if only as romance fantasy; but it will be sure to create supplementary discussions around the ideas of race, racial dialogue, and racial centering.