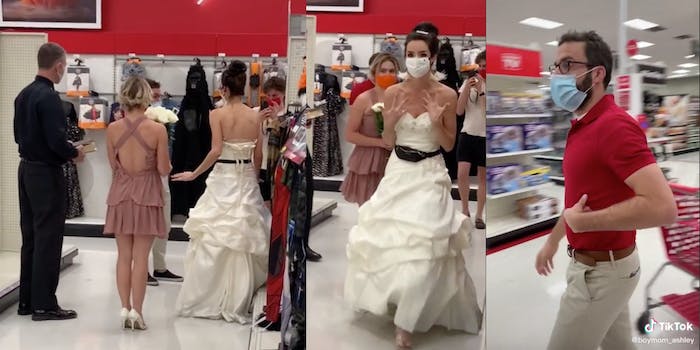 Viewers don't know whether to root for them, condemn the toxicity, or lean into the idea it's staged.

A masked woman, in a full bridal getup, rolled up on her partner during his shift at Target and gave him an ultimatum: marry her right then and there in the middle of the Halloween aisle or end the relationship.

“We’re getting married right now or I’m leaving, I’m out. I’m done if you don’t marry me this second,” she told her beau to be, adding they’d been engaged for two years and that she was done waiting.

The bride didn’t roll up alone, either. She had a little posse that consisted of a lone bridesmaid and a pastor on standby to officiate.

A two-part TikTok of the incident recorded by an amused shopper immediately went viral and has more than 5.5 million views on TikTok alone.

In the video, the bride is pretty chill about the fact strangers are filming the confrontation.

“Hi guys, I’m just finally making him commit, you know. Like we’re getting married now, or, like, it’s over,” she says, speaking directly to the camera.

The woman filming lets out a little “Wooooo, do it!” to cheer her on.

The bride’s partner asks if they could discuss outside, aka not right inside his place of work, and the bride agrees and starts walking out with him.

“I’m shaking,” she says as she leaves the store.

The one thing viewers actually hear the groom say is: “Could someone have told me about it?”

There’s a lot of chaotic energy in the whole ordeal. Aside from the obvious, the bride seems to be wearing a fanny pack around her white wedding dress (maybe to carry the rings?), the bridesmaid clobbers in her heels, and her dress appears to be unzipped in the back. The pastor goes along with the whole thing, and to top it all off, there’s a gorilla costume vibing in the back of the scene.

The bride did manage to walk down the aisle that day, even if it was the sparsely filled costume aisle at Target.

People don’t quite know whether to root for the couple, condemn the toxicity, or lean into the idea that it’s staged. But the one positive in the whole thing is that at least everyone, including the bride, kept their mask on the whole time.