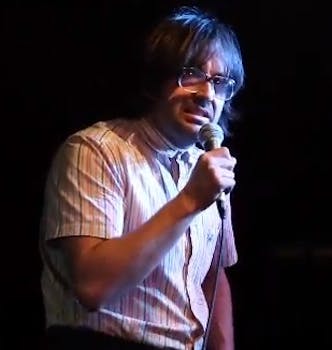 Not even Ricky Gervais could keep this comic from bombing

Gittins, who insisted the show would "be shit anyway," prepared for the gig by tweeting a photo of his (empty) view.

Brian Gittins shares a love for cringe comedy with some high-profile friends. He still can’t get anyone to see him perform.

The comedian hit up his Twitter followers for support after only selling one ticket to a gig in Brighton, England, last night. Luckily for him, Ricky Gervais found the plea and blasted it out to his more than 4.3 million followers.

Despite The Office creator’s enthusiasm, Gittins, a “nasal spray addict” who runs the “best roadside cafe within a 12-mile radius of Pyecombe,” could muster only 35 more ticket sales for the show.

Gittins suggested he’d be trying out new material and urged supporters to show up “if you like watching a human being struggle.” When that tack failed, he got a little more serious: 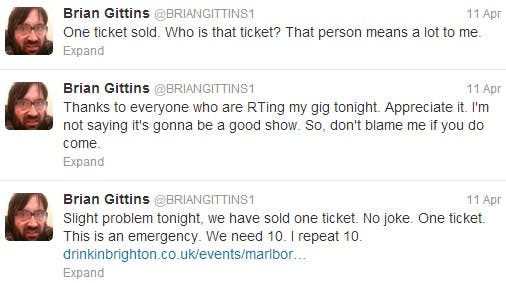 Actually, Gittins and Gervais have been pals for a while. They were performing together at least as far back as 2009, and Gittins (real name David Earl) appeared in Gervais’s recent TV show Derek. Gittins had another big stamp of Twitter approval on Thursday, when the community’s comedy king Rob Delaney praised him too.

The campaign seemed to work—to an extent. Gittins sold a few more tickets within the hour. Then disaster struck and the website crashed. It didn’t help that someone put 50 tickets in his shopping basket with no intention of buying.

Gittins, who insisted the show would “be shit anyway,” prepared for the gig by tweeting a photo of his (empty) view. 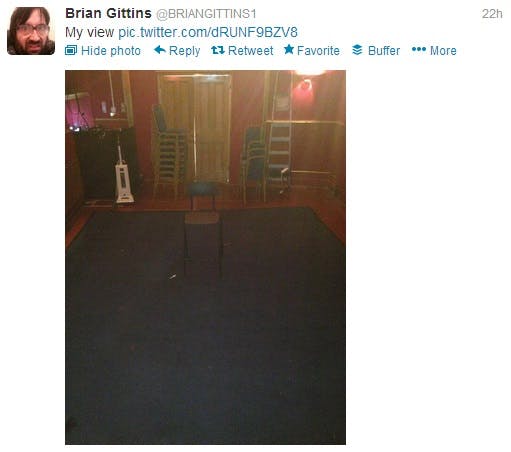 Maybe he’s lucky that even 36 people turned up.

It’s somewhat harsh to call the gig a failure. Some back-of-the-napkin math suggests Gittins grossed £216 for the show off £6 tickets. After the venue’s £110 hire fee, he still would have walked away with a few bob in his pocket.

There’s a kind of beauty in being the only person at a comedy gig, though. You can pinch all the best jokes to tell your mates at the pub and they won’t know they aren’t yours. 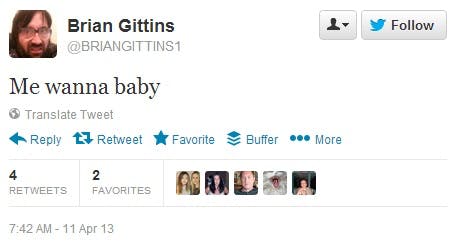