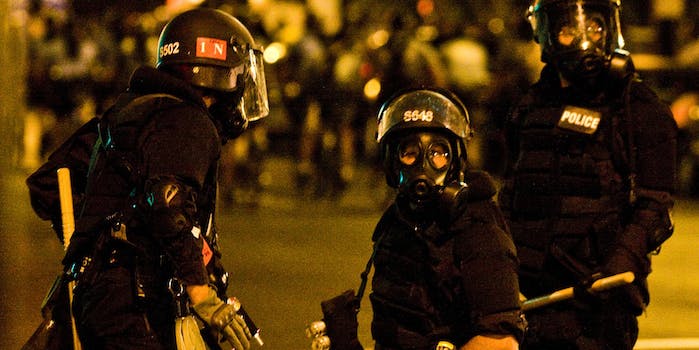 The toxic police response to #ICantBreathe

Does being black in America always mean holding your breath?

Jason Barthel, a Mishawaka police officer and owner of South Bend Uniform Company, claims he wanted to do something that would “bring people together” after the national unrest following the lack of indictment of the killers of Michael Brown and Eric Garner, so he created a T-shirt with the words “Breathe Easy, Don’t Break the Law” on the front and began selling them online. The phrase seems to mock Eric Garner’s last words, caught on videotape: “I can’t breathe.”

The outrage was swift. Officer Barthel’s T-shirt statement comes in the midst of other police actions that have grabbed media attention, such as the Cleveland Police, who demanded an apology from the Cleveland Browns after receiver Andrew Hawkins wore a shirt calling for justice for Tamir Rice and John Crawford, two more victims of police violence. When five St. Louis Rams players walked onto the field during pre-game introductions with their hands raised above their heads in the now famous “Hands Up, Don’t Shoot” pose, the St. Louis Police Officers Association called for the NFL to take action against the players, even going so far as to call protestors in Ferguson “violent thugs.”

These sentiments communicate an impression of police under siege; benevolent and misunderstood public servants who are victims of an unfair smear campaign, fighting tirelessly against “thugs” and “criminal-endorsing liberals.” The New York Times came under fire for referring to 18-year-old Michael Brown as “no angel,” a choice of words they have since defended—and then expressed regret for. The same goes for Eric Garner, whose death some have called justified because of the fact that he may have been illegally selling loose cigarettes when he was confronted by police. One look at the comments on Officer Barthel’s company’s Facebook page tells us that Garner’s death, to some, was justified on account of his selling of cigarettes. But should it matter, many have asked? Does a person need to be angel to not deserve being killed by police while unarmed? Charles M. Blow at the New York Times says that the idea of a perfect victim misses a larger point:

But the very existence of that iniquity is often questioned, with claims of “colorblindness” invoked when allegations of racism arise. When criticized for their “no angel” comments, the New York Times insisted that they would have done the same had it been a white person who was killed—despite the fact that the white people they have chosen the words “no angel” to describe include Al Capone, Nazi Field Marshal Erwin Rommel, and one of the Columbine shooters, among others. We live in a nation where stop and frisk programs disproportionately target African-Americans despite the fact that whites are more likely to have guns or drugs than minorities. In Ferguson, black residents are stopped and arrested far more often than white residents, though actually, a higher percentage of white residents are found to have contraband; 34.04 percent of the contraband hit rate versus only 21.71 percent. The numbers: Black residents make up 67.4 percent of Ferguson’s population, 84 percent of the traffic stops, and an alarming 92.7 percent of arrests.

Yet there are many—white people, mainly—who insist that the justice system is “colorblind.” Obey the law, these people believe, and you have nothing to fear. Sunil Dutta, a former police officer, wrote a controversial piece for the Washington Post titled “I’m a Cop. If You Don’t Want to Get Hurt, Don’t Challenge Me.” Aside from being heavily flawed by his position of privilege as a police officer, the article fails to mention race or bias at all, instead making claims like “the officers are rarely at fault” and going further into what he believes is reasonable advice for dealing with police:

If you believe (or know) that the cop stopping you is violating your rights or is acting like a bully, I guarantee that the situation will not become easier if you show your anger and resentment. Worse, initiating a physical confrontation is a sure recipe for getting hurt. Police are legally permitted to use deadly force when they assess a serious threat to their or someone else’s life. Save your anger for later, and channel it appropriately. Do what the officer tells you to and it will end safely for both of you. We have a justice system in which you are presumed innocent; if a cop can do his or her job unmolested, that system can run its course. Later, you can ask for a supervisor, lodge a complaint or contact civil rights organizations if you believe your rights were violated. Feel free to sue the police! Just don’t challenge a cop during a stop.

There’s a lot about Dutta’s article that is problematic—the suggestion that the best way to avoid being killed or injured by a police officer is doing exactly what he says without question is concerning at best and terrifying at worst—but the idea that “we have a justice system in which you are presumed innocent” speaks to the belief in a colorblind system in which everyone gets what they deserve, and if you’re killed in this perfect system, you must have done something to justify it. Perspectives like Dutta’s and Barthel’s do nothing to address the fact that people—including police officers—see black kids as less innocent and less young than white kids and that these perceptions affect how people perceive criminal acts. Furthermore, all-white jury pools have been found more likely to convict black defendants, making the idea of a colorblind justice system difficult to believe for those who are destroyed by that system’s bias.

Racial bias combined with arrogance unleashes another host of problems. “Contempt of cop” is law enforcement jargon for behavior by citizens towards police that officers perceive as disrespectful or insufficiently deferential to their authority. Police reactions to “contempt of cop” are considered to be a sort of “occupational arrogance,” bred by exactly the kind of culture and attitude that Dutta promotes in his Washington Post article. When citizens aren’t sufficiently deferential, violence and/or arrests are officers’ way of coping with what they perceive as disrespect. When Harvard professor Henry Louis Gates, Jr. was arrested in front of his home in 2009, it was his outward expression of anger that police say led to their decision to arrest him. Others say this was a clear case of “contempt of cop.” The same for journalists in Ferguson, Mo., who were arrested for not moving fast enough. In 2011, a woman was awarded $97,500 in damages after she was unconstitutionally arrested by two officers who were offended by statements she made in a convenience store about police. In 2010, a man was arrested for having the audacity to ask for an officer’s badge number.

Obeying the law, it seems—and knowing one’s rights—does not serve as a magical shield against arrest. And certainly not violence. Barthel’s T-shirts seek to reinforce a fantasy: The imaginary notion that innocent people are never killed by police. In Barthel’s mind, Eric Garner would be alive if he hadn’t _________. Mike Brown would be with us today if he had just _________. But this fantastical claim ignores the realities of far too many.

Barthel claims that the words “breathe easy” are supposed to be comforting. “We’re here to protect the public and we want you to breathe easy knowing that the police are here to be with you and for you and protect you,” he told WSBT. But who exactly can breathe easy, breaking no laws and in the presence of police? Aiyana Jones, seven years old and killed by police in her sleep? Roy Middleton, 60 years old and shot at 15 times by police in his own driveway? Sean Bell, killed by police on his wedding day? Abner Louima, who was arrested and sodomized by a police officer—who walked? Amadou Diallo, dead, shot at 41 times for reaching for his wallet? Levar Jones, who obeyed a South Carolina trooper and reached for his wallet before the trooper opened fire? John Crawford, who was killed for carrying a BB gun in an open-carry state? Tamir Rice, 12 years old, killed for carrying a BB gun in an open carry state?

A Yale study last year found that in the case of Chicago homicides—a city often finger-wagged when derailers attempt to refocus the conversation on police violence to “black on black crime”—6 percent of the population was involved in 70 percent of the murders. Yet people like Barthel continue to roll out the tired myth that if people merely obeyed the law—that 6 percent of the population—then the innocents would stop dying. Of this, Charles M. Blow says, “So, what are we saying to the vast majority that are not involved: that they must accept the unconscionable racial imbalance in the police shooting numbers as some sort of collateral damage in a war on crime? No!”

No. Yet the Duttas of the world would declare “if you don’t want to get hurt, don’t challenge me,” and the Darren Wilsons of the world would insist that they would have done nothing different, if given the chance. Police officers want to be revered, but to quote Charles M. Blow one last time, “to be held in high esteem you must also be held to a higher standard.” Making T-shirts that essentially threaten the public with murder hardly make one worthy of esteem.

Who can “breathe easy” in America? Not Aiyana. She will never breathe again. Not Sean Bell, murdered on his wedding day. And until police brutality is addressed, and racism eradicated, being black in America seems to mean always holding one’s breath.