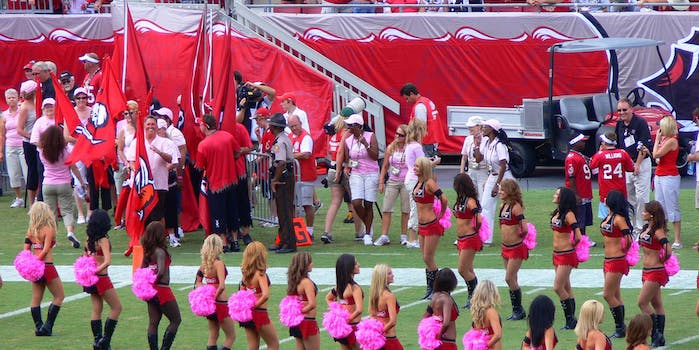 The NFL’s pinkwashing campaign is a naked PR grab

The NFL can't pinkwash its way into the public's good graces isn't working.

The NFL has a tendency of accidentally exposing breasts. You may recall Janet Jackson’s “wardrobe malfunction” during her Super Bowl halftime performance with Justin Timberlake. As October, officially known as Breast Cancer Awareness month, draws to a close, it looks like the NFL is also responsible for exposing the lie called “breast cancer awareness.” Thanks to the league’s high-profile support of the charity effort, for the last few years it’s become an annual tradition for journalists to write articles that call into question the NFL’s involvement. On the face of it, it does seem peculiar. Why does a league famous for violent 300-pound men care a stitch about breast cancer?

Because it makes for great PR. The NFL is tapping into the juggernaut of breast cancer awareness in an attempt to appease the public, but unfortunately for the league, not everyone’s buying it.

For those who may not follow the NFL as religiously as I do, professional football has a “woman problem.” It’s had one for as long as I can remember. In the eighties and nineties, people began to openly say the tradition of cheerleaders was sexist and continue to make that claim to this day. Critics say the treatment and payment of cheerleaders is disgraceful (it is, they’re currently fighting to make minimum wage and have few labor protections). There has also been copious debate about professional female reporters in the locker-room and on the sideline. The league’s woman problem has most recently centered on acts of violence against women by players. Like this season, when a scandal erupted after video surfaced of running back Ray Rice knocking his fiancee unconscious in an elevator.

The NFL has primarily chosen to deal with it by launching a massive PR campaign, and breast cancer awareness provides the perfect opportunity. The league points to its “Crucial Catch” campaign to say that its commitment to breast cancer awareness is proof the league cares about women and is actively doing things to help women enjoy better, fuller lives. Others say it’s part of a plan to pinkwash the NFL’s PR woes and grow the league’s female fan base. Foremost, the NFL seems to believe their charity effort should offset criticism of the league’s pattern of sexism and treatment of women. What the NFL is learning is that instead the critics get louder every year. And they have good reason.

Last season marked five years of support for its breast cancer awareness campaign. Reporters noted that, between 2009 and 2012 (four seasons), the NFL raised 4.5 million dollars for their charity work. That’s not bad. You can buy a lot with 4.5 million dollars. Gateway for Cancer Research offers a program where you can pay for a day of treatment for a breast cancer patient. At a cost of $12.85 for one day for one patient’s treatment, 4.5 million would pay for 350,194 days of treatment. The costs for running research labs—you know, those things that find cures and treatments—run in the millions annually. To put those numbers in further perspective, though, last year the league made 9 billion dollars.

Boasting that the league donated 4.5 million dollars over four years, while earning 9 billion per year, is the NFL’s best proof they “care about women.”

The NFL got into the business of breast cancer awareness because of one woman. She’s the wife of a team owner. Wanna know which team? (Because this answer says so much.) The Washington Redskins.

In 1999, the team was approached by sorority sisters from Zeta Tau Alpha. They asked for help with their breast cancer awareness campaign. Impressed by their request, Tonya Snyder, the wife of Dan Snyder, owner of the Washington football club, joined them and stood with the sisters and handed out pink ribbons to fans outside the stadium. Ten years later, in 2009, the NFL made her awareness effort a league wide campaign.

As part of the annual wave of journalistic critiques that are written each season and call into question the NFL’s month-long pinkfest, David Pincus at SBNation wrote:

Now consider this: in 2011, the MDA Show of Strength, formerly known as the Jerry Lewis Telethon, raised $31 million to fight muscular dystrophy in a single night, and that was down from the amount raised in 2010 ($48 million), when Jerry Lewis was still the host. That means that at their current pace, it would take the NFL another 76 years to raise as much money as the MDA raised in their last two shows. Which begs the question: Is this truly the best the NFL can do?

The worst part of that question is that the writer asked it two years ago and nothing has changed.

However, the winds of change blow from all directions. In another fitting bit of irony, it looks like the league’s domestic abuse problem is causing some to question the breast cancer awareness campaign as well. The U.S. military recently expressed doubts about the NFL and its future involvement as a $10 million dollar sponsor. Secretary of Defense Chuck Hagel is unsure if the U.S. military can or should support the NFL again next season. The secretary has begun to look into the relationship between the military and pro football, and has requested detailed information. CNN reported that Pentagon officials have said, “the secretary wants to fully understand that relationship, in case he decides to make some changes to it.”

In September of this year, Proctor & Gamble announced they were officially pulling their support for the NFL’s Breast Cancer Awareness month this season. The corporation had grown tired of the NFL’s constant “unpleasantries.” As reported by CNN:

Procter & Gamble remains an NFL sponsor, but it did issue a statement that said, ‘Domestic violence is completely unacceptable and we have strongly urged the NFL to take swift and decisive action to address this issue, and we will determine future actions as needed.’

Perhaps the NFL will listen to the groans of its pocketbook, since it chooses to ignore its media critics and the outcry of its fans. Maybe, as a result of all the media attention and increasing abandonment by their supporters due to other league scandals, the NFL will be forced to change to appease fans.

The NFL’s attempt to use breast cancer awareness as a PR shield is faltering. If you’d like something else to spend your season ticket money on, consider donating to breast cancer research:

M.D. Anderson Cancer Center at The University of Texas