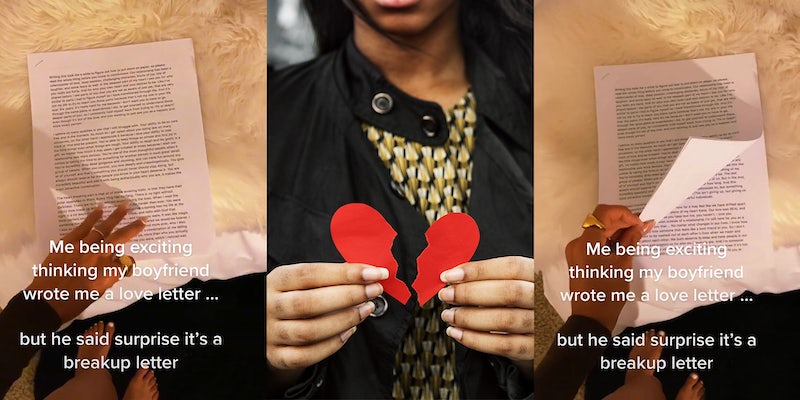 ‘That’s a resignation letter’: Man gives girlfriend several-page document to break up with her

'Me being excited thinking my boyfriend wrote me a love letter...'

A woman says she started recording a TikTok video to capture her reaction to what she thought was a love letter her boyfriend left her. She was in for a surprise.

“When you get home and your sweetie writes you a whole book of a love letter,” TikToker Karla @karlavelarde1234 says while briefly skimming through the pages. “Oh my God, it’s like seven pages or something.”

It seems she did not come to the realization that the letter was actually a breakup letter until after filming.

“Me being excited thinking my boyfriend wrote me a love letter but he said surprise it’s a breakup letter,” the text overlay on the video reads.

Karla later revealed in the comment section why she started recording before reading the letter. “I was so excited that he had finally put the work in. The let down,” she said in response to one viewer who questioned her.

People had mixed feelings about the letter, with one saying: “Well, it seems like a well thought out letter that he put care into it so he must respect you? Have no idea what he wrote.”

Karla responded to this comment, writing, “He told me a surprise was awaiting me [at] home, but no, it was a breakup letter and a magic trick looking suitcase with all my shit in it.”

Others users were critical of both the delivery and grammatical format of the letter, noting Karla may be “better off” without the man in her life as he “couldn’t even indent the beginning of his paragraphs.”

Karla posted several follow-up videos alleging her ex tried to match with both her friend and her roommate on a dating app and that his profile picture is one that she took herself. She also posted another video featuring the letter and his requests for her.

Ironically enough, he asked her to not “hook up or date my friends I hang out with.”

The Daily Dot reached out to Karla via TikTok comment.